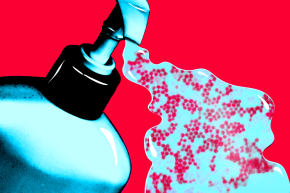 The Future Of Skin Care: Lotions That Feed Our Microbiome
By Alexandra Ossola

The Future Of Skin Care: Lotions That Feed Our Microbiome

Your skin is home to rich and distinct communities of “friendly” bacteria that help our bodies keep harmful, infection-causing bacteria at bay. Now researchers are developing new lotions that would cultivate the beneficial bacteria communities that are unique to each person and help prevent harmful bacteria that can cause conditions like eczema.

Every day, many changing factors, such as humidity, temperature, and pH, affect the skin’s microbiome. Imbalances in the environment can throw off bacterial communities that are normally harmless, causing a common condition called atopic dermatitis (AD) — otherwise known as eczema — a dry, itchy rash that is difficult to get rid of. More often than not, the bacteria causing eczema is Staphylococcus aureus. Though S. aureus can sometimes be beneficial to healthy skin, the bacteria has long known to be one of the major causes of skin infections. People with AD have less microbial diversity on their skin because S. aureus kills other bacteria.

In the study, led by a team from the University of California, San Diego and published Wednesday in the journal Science Translational Medicine, the researchers tried to figure out how to keep S. aureus in check. They first swabbed the skin of 49 patients with AD and isolated several different species of bacteria that, in previous studies, had been shown to generate two different types of chemicals that can kill S. aureus. The researchers then created a lotion containing these bacteria and found that it greatly reduced the presence of S. aureus, first in tests in the lab and on mice and pigskin, then on the skin of participants with eczema, even after just one application. And unlike other types of antimicrobial lotions, this one didn’t affect the existing bacteria needed to maintain a healthy skin microbiome.

Lotion like that would likely need a lot more testing before it could become widely available to treat eczema or similar conditions. But studies like this one might reveal a new technique to treat bacterial diseases—instead of working against the nasty bacteria, we could work with our microbial allies.