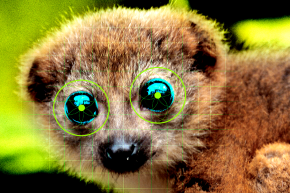 The project could help save them from extinction, and other species too

Keeping track of populations of endangered species isn’t easy. Today, researchers have to trap and anesthetize many animals to tag them, a process that is expensive, inconvenient, and sometimes dangerous or disruptive to the animals themselves. Now a team of researchers has come up with a new way to track individuals: facial recognition software. Though they only developed it for lemurs, the researchers hope others could modify the system to track animals of other species, too.

This isn’t the first time technological advances have helped scientists keep track of valuable species—satellites have long tracked elephants, and more recently drones have captured images of whales and orangutans. But this technique is different because it can non-invasively and objectively track individuals lemurs, not just their number.

The researchers decided to focus their efforts on a species called the red-bellied lemur. Native to east Africa, the species is vulnerable but not yet actually endangered. There’s a heavily studied population in Madagascar in which the facial fur patterns are distinct enough that scientists themselves have learned to recognize individuals, though this often takes years of training. Their distinctive faces made it easy to adapt human facial recognition software to these smaller, fuzzier primates.

According to the study, published Friday in the journal BMC Zoology, the researchers trained their system (they called it LemurFaceID) with 462 images of the 80 red-bellied lemurs in that group. Each lemur had a name or identification number that researchers had previous used to identify it. They designed the system to find the lemurs’ eyes, rotate and crop the image in order to effectively compare the facial features. They then tested the system by having it match images of the same lemur from two different photographs.

In the future, the researchers hope to expand their lemur database, to improve their system’s ability to incorporate new individuals, and to compare the accuracy of their system with that of trained field observers. This technique could also help other researchers who are working on similar projects in other, more endangered species, such as chimpanzees.