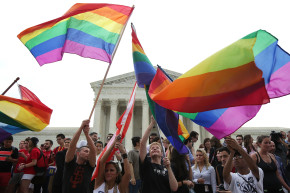 While suicide rates are increasing in the United States at a disturbing rate, particularly for LGBT youths, there’s some legitimately good news: Marriage equality has saved as many as 134,000 teens a year from trying to kill themselves.

According to a new study, states that legalized same-sex marriage in the years before the 2015 Supreme Court ruling saw a significant drop in suicide attempts among teens of all orientations, though particularly those identifying as LGBT.

Researchers at Johns Hopkins University were able to look at suicide rates in 32 of the 35 states that passed laws on marriage equality — both for and against — in the 11 years preceding the Supreme Court’s decision to legalize same-sex marriage nationwide. The difference was stark: After a state enacted marriage equality, suicide attempts among all teens dropped by seven percent, with a fourteen percent drop for gay, lesbian, and bisexual teens in particular. The effect only lasted for about two years before the suicide rate returned to normal, but that’s still a substantial difference from states that kept same-sex marriage illegal. In those states, the suicide rate didn’t budge at all.

In explaining the findings, lead researcher Julia Raifman noted in a press statement that the average teenager isn’t likely to get married anytime soon, so it’s unlikely that LGBT teens changed their outlook because of any specific plans for the future. Rather, marriage equality opened up possibilities for the future that might previously have appeared impossible, which Raifman suggested could serve to break down feelings of social stigma and create hope going forward.

Intriguingly, the reduction in suicide attempts only occurred after the law had actually gone into effect, even if marriage equality had been a popular topic of discussion for years beforehand. In other words, just talking about marriage equality and bringing it into the public discourse wasn’t enough to substantially alter teens’ outlooks. For that, actual changes to the law needed to happen. That’s not to say awareness campaigns don’t work or can’t have concrete benefits — indeed, the researchers can’t say for absolute certain whether it was definitely the new laws or the public campaigns preceding them that were responsible for the change in the suicide rate.

Either way, the evidence does support a link between legalizing marriage equality and reducing teen suicides. And that means the reverse of that statement is possible: Taking away rights could well increase the chances that more teens find themselves in what they see as hopeless situations. As Raifman put it, reducing teen suicide — reducing suicide for people of all ages — really ought to be a priority for everyone, regardless of political views.