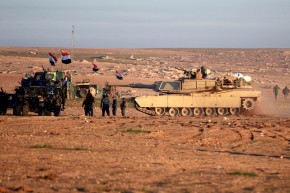 U.S.-backed Iraqi forces dropped leaflets in western Mosul, warning, "This is your last chance to drop your weapons"

U.S.-backed Iraqi security forces started the offensive to liberate the western half of Mosul from the grip of ISIS on Sunday, the last phase in a four-month-long bid to retake Iraq’s second largest city.

“It’s a new dawn, the dawn of a great victory,” said Prime Minister Haidar al-Abadi of the offensive in a television announcement on Sunday morning, in which he instructed security forces to respect the local population and provide humanitarian aid where needed. As of mid-day Sunday local time, the Iraqi army said that it had reclaimed five villages west of Mosul, and was closing in on its target: the Mosul airport, located along the southern edge of the city.

The operation to retake Mosul, formerly ISIS’ most important stronghold, began in mid-October. With the backing of U.S. and other foreign forces, the mission is led by Iraqi forces, Kurdish Peshmerga and Iranian-backed Shiite forces on the ground. More than 100,000 militants are reportedly taking part, making it the largest operation in Iraq since the U.S. invasion of 2003.

“This is your last chance to drop your weapon,” one of the leaflets read. It advised people to “stay inside your houses and raise the white flags” as ground forces approach ISIS positions.

Caption: Iraqi Army leaflets dropped over western Mosul prior to the offensive.

Iraqi forces recaptured the eastern half of Mosul last month, though ISIS forces have since continued to launch attacks there.

U.S. army officer Lt. Gen. Stephen Townsend, commander of offensive operations across Iraq, said in an official statement that “Mosul would be a tough fight for any army in the world, and the Iraqi forces have risen to the challenge.” He added that “the entire coalition salutes and wishes God’s blessings on the brave Iraqi soldiers, police and militias who today are fighting to liberate their country and make the region and the world a safer place.”