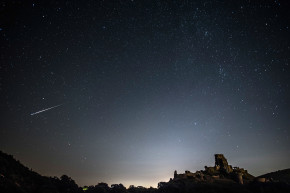 Wait, How Do Meteors Make Their Strange, Unearthly Noises?
By Alasdair Wilkins

Wait, How Do Meteors Make Their Strange, Unearthly Noises?

When a meteor passes high overhead, it’s sometimes possible for witnesses on the ground to hear distant noises. At first blush, that shouldn’t be so strange — after all, a meteor crashing through the atmosphere shouldn’t be a silent event, right?

But the difference between the speed of light and the speed of sound means any noise actually directly created by a meteor shouldn’t reach a person until long after, perhaps even several minutes after, the meteor is out of sight. Now researchers at Sandia National Laboratory have experimentally confirmed the likely, admittedly wild-sounding explanation.

The noises, which have been described as like a sizzling or hissing sound, are probably caused by the light from very bright meteors heating up the surfaces of objects on the ground. That heat then transfers to the surrounding air, creating pressure waves that human ears detect as sounds. It’s a remarkable list of objects that can create the oscillations necessary for these noises, including grass, hair, leaves, and dark clothing. The researchers were able to confirm this effect by exposing objects from dark cloth to a wig to an extremely bright, pulsating light, which produced exactly the same kinds of noises reported by meteorite witnesses.

To confirm the noises picked up in the experiment really were created by the light source, the researchers fed the old English folk song “Greensleeves” into the light. The resulting vibrations created by the pulsing light were far scratchier and noisier than a typical “Greensleeves” recording, yet the underlying song was unmistakable — you can even listen to it for yourself in the paper’s supplementary audio file. Most meteors can’t carry quite so melodic a tune, but we now know with new certainty just why they are so good at making themselves heard.

So if you hear sizzling or hissing above, make sure you look up and then maybe duck.