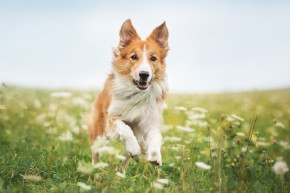 For decades, some unlucky dog lovers have welcomed a bundle of barking joy into their homes, only to see them perish from a mysterious disease mere weeks after their birth. The pups’ seemingly healthy muscles had literally wasted away in front of their owners’ eyes until they could no longer stand and breathe.

It wasn’t until 2010 that a French research team isolated the genetic cause of this specific muscle-wasting disease in a group of Labrador Retrievers; these dogs were suffering from a single mutation that left them unable to produce an essential protein known as myotubularin. What’s more, it was the exact kind of mutation and disease also long found in male human babies, too. That made the researchers wonder if these unfortunate puppies could help us study the disease and even someday find a way to save both pets and people.

Now, years down the road, it appears they were right, thanks to a cutting-edge gene therapy treatment.

An international group of researchers, including some from the original French team, gathered together 10-week-old puppies with the mutation to take part in a randomized controlled trial. The dogs who were given a treatment that repaired their defective myotubularin gene avoided the crippling muscle degeneration that killed the placebo-treated dogs by week 17. And by the ninth month of study, the saved puppies’ muscle and neurological function continued to match readings from healthy dogs, particularly for those that got the highest doses.

The findings, building on an earlier proof-of-concept study of dogs and mice by the researchers, signal that a scaled-up treatment could save the lives of boys with the same sort of genetic flaw.

“I believe that the dog study will be about as close as we will ever get to a human study,” senior author Dr. Martin Childers of the University of Washington told Vocativ in an email. “Because we found evidence that the gene therapy product spread throughout the entire skeletal musculature of adult dogs after a single infusion, it seems reasonable to expect a similar result in human patients.”

Gene therapy has received plenty of attention for its potential to treat otherwise irreparable DNA defects, but according to the researchers, there’s been little focus on bone- and muscle-related genetic disorders. The condition treated in the current study, called x-linked myotubular myopathy, affects around one in every 50,000 boys, with most sufferers living no more than a few years. And though there’s no true tally of how often it affects dogs, case reports of similar-sounding diseases have been published stretching back decades.

There will undoubtedly be hurdles to climb before the treatment Childers and his team developed, or a similar one, can be tested in people, Childers said. “It is always possible that humans might respond differently, thus, clinical trials will be conducted with extraordinary care and oversight,” he explained. And though the dogs suffered little adverse effects from the therapy — delivered via a harmless virus — researchers will still have to watch out for any possible toxicity in people.

That said, the treatment offers hope for both man and mutts. The changes seen after a single treatment have lasted for several years in the small sample of dogs the team has raised. So it’s possible that people won’t need repeated doses or they would be infrequent, Childers said — a big positive, given how expensive gene therapy is today.

And it’s also likely that these treatments, within the larger field of regenerative medicine, will find a place for dogs and other animals sooner than it will for people.

“Veterinary medicine is ahead of human medicine in some cases with respect to regenerative technologies,” Childers said. “Stem cell infusions, for example, have been given to pets and horses for more than a decade.”

But people may not have to wait so long for the promise of gene therapy either. Childers is hopeful that Audentes Therapeutics, a San Francisco biomedical company he’s collaborating with (and which partially funded the current study), will begin their first human trials of a gene therapy treatment for x-linked myotubular myopathy, based on his team’s research, later this year.

The team’s findings were published earlier this February in Molecular Therapy.