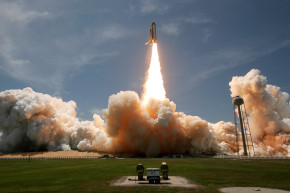 Republican lawmakers seem to have found yet another way to undermine the battle against climate change.

GOP members of Congress and officials with President Donald Trump’s administration want to shift NASA’s mission away from climate change research to focus exclusively on space exploration, according to a report in E&E News. Representative Lamar Smith, chairman of the House Committee on Science, Space, and Technology, told E&E that he wants to “rebalance” NASA’s assigned duties since President Barack Obama’s administration cut funds for deep space exploration.

“Our weather satellites have been an immense help, for example, and that’s from NASA, but I’d like for us to remember what our priorities are, and there are another dozen agencies that study earth science and climate change, and they can continue to do that,” said Smith, a Republican from Texas. “Meanwhile, we have only one agency that engages in space exploration, and they need every dollar they can muster for space exploration.”

It’s not known exactly how officials would go about changing NASA’s duties. Climate change research, performed by the agency’s Earth Sciences Division, accounts for about $2 billion out of NASA’s $20 billion budget. The work could be transferred to a different body, such as the National Oceanic and Atmospheric Administration (NOAA), or it could be eliminated altogether.

While it’s true that NASA is the lone federal agency that explores space, it has unique capabilities to study climate change — precisely because of its satellites. The agency counts more than 12 earth science satellites in orbit at present, and these analyze the atmosphere, the biosphere, and the oceans. While NOAA does important work studying climate change, that agency does not have the same ability to study climate change from space like NASA does.

The uncertainty surrounding NASA’s earth science arm, as well as the general hostility toward climate science under Trump — who once alleged that global warming was “created by and for the Chinese” in order to cripple American manufacturing — has inspired the agency to practice understated acts of defiance. As The Washington Post points out, NASA has taken to its social media channels to directly post about climate change and the science surrounding it.

“I want to put images right in front of people that show that #globalwarming is, in fact, happening.” —@thaw2017 https://t.co/wBdo0Uoh7Z

Cathleen Kelly, a senior fellow at the Center for American Progress, sees the possible shift of NASA’s mission as yet another attempt by Republicans in Washington to block climate change research.

“Cutting NASA’s funding for climate research would essentially leave businesses and policy leaders in the dark about key climate change trends and their consequences for people,” she said. “And NASA is the only U.S. agency with the satellite capability to monitor long-term warming trends and their effects on people and the globe.”

Vocativ emailed Rep. Smith’s press team on Friday for comment but hasn’t yet received a response.