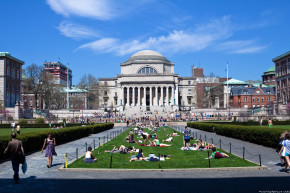 The university's second e-mail arrived only 75 minutes later to say, 'sorry! our mistake.'

Several hundred students thought they were accepted to their Ivy League dream school, only to have their dreams dashed when school officials notified them about an hour later that it was a mistake.

Columbia University Mailman School of Public Health on Wednesday accidentally sent an acceptance email to nearly 300 students for the Master’s Program. About 75 minutes later school officials sent a follow-up email to say the acceptance email was sent in error.

“It’s ridiculous. I don’t understand how they can get away with it and just say ‘sorry,’” one applicant told the New York Times. When she called the university for clarification, they apologized for the mistake, but could not offer her an explanation.

“We discovered the mistake immediately and within an hour sent follow-up e-mails explaining and apologizing for the error,” Julie Kornfeld, Vice Dean for Education, said in a statement to Vocativ. “We are working assiduously to strengthen our internal procedures in order to ensure that this mistake does not happen in the future.”

For Anna Ivey, a college admissions consultant, and former dean of admissions at the University of Chicago Law School, the situation is quite logical and comes down to the fact that everyone makes mistakes. “It’s fascinating to me that schools that are known for their tech prowess in terms of education, like MIT and Carnegie Mellon, have done it too,” Ivey told Vocativ. “Every year, like clockwork, it’s a question of who is it going to be this year.”

Since admissions counselors transitioned to notifying applicants by email, there has been a long list of similar mistakes from other top universities. Last year, Carnegie Mellon University accepted 800 applicants only to follow up the same day to apologize for their mistake. UCLA made the same error for nearly 900 applicants in 2012. Time Magazine has kept a list of some of the worst college admissions mistakes since 1995. Perhaps the largest admissions gaffe happened in 2009, when the University of California San Diego accidently sent an acceptance e-mail to 28,000 applicants.

Correction: An earlier version of this story stated that the largest admission mistake was made by UC Davis in 2009, when in fact the gaffe was made by UC San Diego. The story has been updated with the name of the correct school.