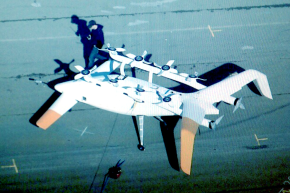 You’ll need more than just your passion for flying

There are several companies racing to develop a fully functioning flying car, but they’ll never take off unless they test out their vehicle first with a human pilot.

Silicon Valley tech company Kitty Hawk and its subdivision Zee.Aero have posted recruitment ads online looking for flight test engineers to be the first to fly their aircrafts. Although all brave souls are welcomed to apply, those interested will have to meet certain requirements, including having a pilot’s license and previous experience operating aircrafts. They’ll also be required to have a background in engineering.

“As a member of Kitty Hawk’s R&D team, you will conduct flight testing of innovative prototypes, with an eye toward making them as robust as possible. We design/build/test/fly in rapid iteration, so you’ll be energetic, adaptable and a fast learner who can make sound judgments in safety-critical situations,” reads the job description for Kitty Hawk’s opening.

Zee.Aero, founded by Google’s co-founder Larry Page, filed a patent for its aircraft in 2013. Since, pictures of the actual prototype at the company’s testing site (which is near the GooglePlex) have surfaced online. The aircraft is narrow enough to fit into a standard shopping center parking space and is said to be able to take off and land vertically using eight small electric motors turning four-blade propellers — it kind of looks like a plane with drone features. The aircraft was designed by Ilan Kroo, who’s an aeronautics professor and NASA scientist.

Kitty Hawk is not the only company toying with the idea of developing a flying car or similar aircrafts, there’s a long list including AeroMobil, Terrafugia, Airbus, Uber, Joby Aviation, eHang and even Dubai’s Roads and Transportation Agency.

It’s still unclear where these companies are in the process of getting a car to fly, but for the most part they all have concepts of the aircraft or a developed prototype. However, Dutch company PAL-V is already accepting pre-orders for its first commercial flying car, which is expected to hit the market in 2018. The PAL-V Liberty (as seen in the video below) is a three-wheel gyrocopter that has retractable propellors, but it you were to see it out in the open you’d think it’s just a tiny helicopter.

Regardless of them having a fully-functioning vehicle, regulations for flying have not been made so flying cars are still years away from soaring through the skies.