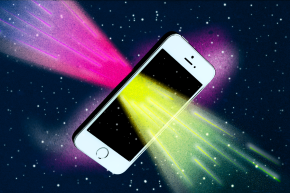 When Your Phone Freezes, It Could Be Outer Space That’s To Blame
By Alejandro Alba

When Your Phone Freezes, It Could Be Outer Space That’s To Blame

Once in awhile, it’s not Apple's or Samsung’s fault

You know when your iPhone freezes and you immediately curse, “damn you, Apple. They probably do this on purpose so I have to buy the latest model.” Well, once in awhile at least, it may not be the manufacturer you should be blaming. Alien subatomic particles could also be causing these malfunctions.

Researchers at Vanderbilt University, who study the effects of radiation on electronic systems, have recently found that there is an increasing problem with personal electronic devices such as computers and smartphones being affected by particles raining down from space. These electrically charged particles, which are generated by cosmic rays that originate outside the solar system, can cause computers to crash and force you to hard-reset smartphones.

“This is a really big problem, but it is mostly invisible to the public,” Bharat Bhuva, professor of electrical engineering at Vanderbilt University, said in a statement. His analysis was presented on Friday at the annual meeting of the American Association for the Advancement of Science in Boston.

Millions of these subatomic particles strike your body each second, but they don’t have any harmful effects on living organisms. However, when they strike electronics, the energy filled particles can interfere with the integrated circuits of a device and alter individual bits of data stored in memory — which is also referred to as a single-event upset (SEU). New electronic systems are more likely to be affected by SEUs due to the increase in the total number of transistors being used inside each devices, Bhuva’s analysis found.

Although a simple reset can fix your smartphone affected by an SEU, there have been times where these particles have caused larger-scale problems. In 2003, a town in Belgium had a bit flip in an electronic voting machine that added 4,096 extra votes to a candidate. In 2008, an SEU caused a Qantas passenger jet’s autopilot to disengage. There have also been several other unexplained glitches in airline computers that experts believe were caused by SEUs. These glitches typically cause flights to get cancelled.

“Our study confirms that this is a serious and growing problem. This did not come as a surprise,” Bhuva said. “Through our research on radiation effects on electronic circuits developed for military and space applications, we have been anticipating such effects on electronic systems operating in the terrestrial environment.”

SEUs are not always easy to identify, though. Usually, the only way to determine if it’s an SEU is by eliminating all other possible causes.

There also aren’t many solutions to shielding devices from these particles. It would take more than 10-feet of concrete to keep a circuit from being zapped. However, engineers have started to design better computer chips that reduce SEU vulnerability.  The aviation, medical equipment, transportation, communications, financial and power industries are all taking steps to reduce risk of particles affecting their circuits. Yet, the consumer sector is falling behind and needs to step it up in order to find ways to protect devices, according to Bhuva.

“This is a major problem for industry and engineers, but it isn’t something that members of the general public need to worry much about,” Bhuva said.