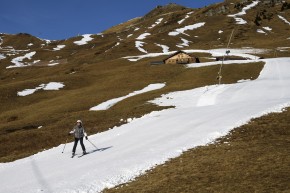 If you have always dreamed of heading to the Alps for a ritzy ski vacation, well, time is running out.

And new research in the journal The Cryosphere suggests it’s only going to get worse from here, with even the most optimistic scenario for the next century of climate change suggesting at least 30 percent of the alpine snow cover will be completely gone by 2100.

Again, that’s looking on the bright side: The more likely outcome, based on how humanity is dragging its feet on dealing with climate change, is that about 70 percent of the snow cover will disappear by 2100. A team of Swiss researchers found that, if we stay on our current climate path, the snow season will be two weeks shorter by 2035 and a whopping 11 weeks — nearly three whole months! — shorter by 2085. And that’s at an elevation of at least 3,000 feet above sea level. Anywhere below that will see mere days of snow by mid-century. Already banks are refusing loans to resorts below 5,000 feet, suggesting the gloomy future is affecting the industry now.

On the list of people potentially affected by climate change, you could be forgiven for not placing a bunch of wealthy skiers in the Swiss Alps high on the list. But the coming financial struggles for those rich resorts are the first indicators of a far greater raft of environmental issues. There’s the obvious problem that many resorts will have to make more artificial snow, a process which has far-reaching environmental issues. And, as the researchers point out, the melting snow in the Alps flows into the Rhine, Danube, and Po, three of Central Europe’s most heavily used rivers.

It’s an open question just how rich these ski-loving alpine countries can remain when there’s no skiing left to do. Famously affluent Switzerland, for instance, makes about $15 billion and creates about 150,000 jobs on the strength of tourism. The snow-covered Alps are obviously a big part of that. A snowless mountain range isn’t likely to impoverish one of the world’s richest countries, but one estimate suggests the annual losses for just one region could be around $60 million. Skiing is serious business, and not necessarily just for wealthy tourists missing out on the fresh powder.