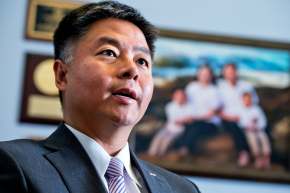 As President Trump ramps up his war on leaks, some in Congress are offering assistance

In an act of defiance toward the administration of President Donald Trump, two sitting members of Congress have issued a brief guide for federal employees who want to leak information to the public.

Issued by Reps. Ted Lieu (D-Calif.) and Don Beyer (D-Va.), both fierce critics of Trump, the guide is short and divided into two sections.The first is federal employees’ legal rights, which include protections under the First Amendment and Whistleblower Protection Act. The second is recommended methods for leaking and securely communicating, which includes what has become a maxim amongst cybersecurity advocates: Use the encrypted chat application Signal.

Trump’s nascent presidency has been rife with leaks and attempts at crackdowns. His administration has ordered several federal agencies, including the Department of Health and Human Services, Department of the Interior, and especially the Environmental Protection Agency, to largely curb  communications with the press. That’s been met with a flow of leaks from those agencies, with no immediate end to the back-and-forth in sight.

In addition, intelligence officials have leaked unprecedented, explosive claims about Trump’s inner circle’s relationship with the Russian government before Trump took office. Most notable was that Trump’s National Security Advisor, Michael Flynn, had spoken with Russian Ambassador Sergey Kislyak about lifting U.S. sanctions on Russia while Barack Obama was still president. Flynn at first denied the allegations, then admitted them and resigned Monday, becoming the shortest-serving National Security Advisor in history.

In response, Trump has grown increasingly agitated. He has so far refused to answer questions from the Washington Post, Wall Street Journal, and New York Times, the outlets that broke the most bombastic details surrounding Flynn’s scandal. And in contradictory tweets, Trump has both condemned the Flynn leaks as “illegal classified leaking” and claimed the leaks were “fake news” fabricated by those outlets. Trump has offered no explanation for why Flynn would resign over fabricated claims, or why he would accept such a resignation.

“We believe the American people have a right to know how their government works,” Lieu said in a statement accompanying his guide’s release. “The Trump administration has strapped a muzzle on federal agencies and attacked legitimate whistleblowers. Should federal employees wish to break that silence, we want this to be a resource for the safe and responsible disclosure of information.”