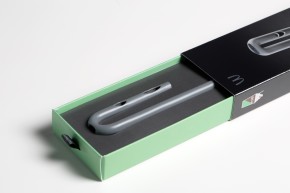 McDonald’s is known for its Big Mac, Happy Meals, and creepy clown mascot, but not for trying to be innovative with technology. Yet, the fast food chain restaurant teamed up with aerospace and robotic engineering firms to reinvent the straw and make it easier to drink its Chocolate Shamrock shakes.

The chain’s new STRAW, which stands for Suction Tube for Reversal Axial Withdrawal, was created by JACE and NK Labs and is meant to suck the ideal flavor ratio of 50 percent chocolate and 50 percent mint in each sip of the seasonal milkshake. Regular dumb straws are only capable of sipping from the very bottom, and the Chocolate Shamrock shake is inconveniently layered, with the chocolate flavor on the bottom and the mint on the top.

“It was a puzzling assignment but one with an ambitious goal,” Seth Newburg, principal engineer and managing partner at NK labs, said in a press release.

The project is definitely puzzling and very complex for it being pretty much just a gimmick. McDonald’s description of the product is actually very accurate: The straw is “probably more revolutionary than actually needed.”

To show off its work with the STRAW, McDonald’s presented it in a parody commercial that seems to mimic Apple’s 2012 Jony Ive commercial. The original ad features the English designer against a white backdrop passionately talking about the iPhone’s characteristics in great detail.

McDonald’s commercial does just the same. It even pokes fun at the British accent by hiring an American actor to speak with an accent. When he first comes on screen, he’s introduced as “Person with British Accent.”

If you’re one of the few who would line up to get a STRAW, do it soon. McDonald’s only produced 2,000 suction devices, which it’ll make available in 12 states on February 24. However, only certain locations in those states have been chosen to distribute straws and people will have to show up at specific times if they want one.

McDonald’s is not the first fast food restaurant to try and appeal to younger demographics with techie gimmicks. KFC has constantly tried pushing limited edition products, too. The fried chicken restaurant has produced smart keyboard trays, edible nail polish and a chicken bucket that doubles as a Bluetooth photo printer.