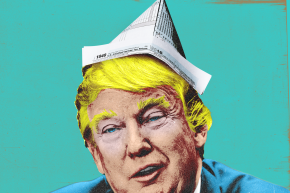 It was President Donald Trump himself who famously said that “the only one that cares about my tax returns are the reporters” and that “they’re the only [people] who ask.” To use one of Trump’s own favorite expressions, a simple way to describe that assertion: “Wrong.” Dead wrong.

In the 28 days since the petition was first created on We The People, the White House petition platform, over one million people have signed a petition calling for the immediate release of his full tax returns. That’s more than twice as many people who signed the second-most popular petition in We The People’s 5.5 year history.

Tech entrepreneur Anil Dash of Fog Creek Software created the petition immediately following Trump’s inauguration, making it the first of his administration. Though there was a significant number of reported user errors as the Trump transition team overhauled the White House website, it still reached 100,000 signatures in just one day and was among the most frequented government pages that day.

“I wrote this petition because it’s nice for other people to see that they are not alone,” Dash told Tech Crunch. “Basic compliance with the Constitution is a bare minimum for our elected officials… But if we can’t get the information to verify that, we have no assurance that our President is following the law.”

In accordance with the “We the People” Open Government Initiative protocol, a petition would be reviewed and met with an official response if signed by 100,000 people in 30 days. (Originally, it was just 5,000 signatures, then raised to 25,000, as ridiculous requests for things like the funding and construction of a Death Star went viral online and began warranting responses.)

Prior to this petition, the record-holding petition under Obama was an effort to recognize the Westboro Baptist Church as a hate group, according to a Pew Research report conducted in July 2016. The Obama White House responded, to the dismay of its 367,000 signatories, refusing to do so and instead saying that was a determination to be made by private organizations like the Anti-Defamation League. Another new petition created on Inauguration Day calling for Trump to divest or put his assets in a blind trust is making headway as well.

Trump has repeatedly refused to release his tax returns, so it was never likely the petition would achieve its goal. Dash noted that he didn’t expect the administration to begin “suddenly embracing accountability.”

Sure enough, on January 22, Trump counselor Kellyanne Conway announced on ABC’s “The Week” responded that “The White House response is that he’s not going to release his tax returns,” adding “We litigated this all through the election.”

In addition to the petition, protestors have planned anti-Trump protests for Tax Day to prove the public won’t let the issue go. In another grassroots effort, a few brave souls are planning to voice their disapproval of Trump’s refusal to disclose his taxes (in addition to government spending on war, the proposed Mexican border wall, and other military action) by refusing to pay federal income taxes this year themselves.