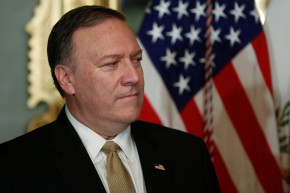 Mike Pompeo, Director of the Central Intelligence Agency — REUTERS
By Gilad Shiloach
Feb 16, 2017 at 4:55 AM ET

In a statement on Telegram issued Thursday, al-Qaeda’s official media branch blamed the Saudi royal family for being American “agents” and called Pompeo a “Crusader hater” who had made “comments against Islam and Muslims.” It called the award “a medal of shame and humiliation” from “an organization known for its heinous crimes and evil acts,” and called for a fight against “these apostate regimes.”

Prince Bin Nayef, also the Saudi interior minister, oversaw a crackdown on the group and survived an al-Qaeda assassination attempt in 2009.

The statement comes as Pompeo is traveling in the region on his first overseas tour since being confirmed as CIA chief in late January.

Pompeo, a member of the House Intelligence Committee who had represented Kansas since 2011, has characterized the war against terror as a war between radical Islam and the Christian faith. In 2013, he told Congress that American Muslim leaders who fail to condemn Islam-motivated terror attacks are “potentially complicit in these acts, and more importantly still, in those that may well follow.”