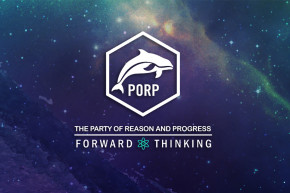 Trump’s Top Troll: The Man Who Is First On The President’s Tweets
By Sara Morrison

Trump’s Top Troll: The Man Who Is First On The President’s Tweets

Ever wondered how that one guy seems to get to top of Trump's twitter responses and what that "PORP" thing he's always talking about is? Here you go.

If you don’t recognize the name, this might help jog your memory: it’s the Twitter account with a drawing of a porpoise and the letters P-O-R-P in the profile photo. Usually, McAfee leaves a string of tweets rebutting whatever claim Trump has just made, sometimes with a gif or meme making fun of the president. Sometimes it promotes another account, @theofficialporp, mentions PORP’s positions on various policies, and makes official statements to Trump on behalf of PORP. Almost always, the tweets jump to the top of the responses, where they get thousands of retweets and likes.

@DavidGMcAfee The content of your message aside, are you on some sort of personal mission to link your party to every Trump tweet?

“PORP” stands for The Party of Reason and Progress, a political movement McAfee, just 27 years old, started to promote “evidence-based policies” rooted in science and reason. McAfee’s day job (and first claim to fame, before the tweets) is writing books and speaking out about atheism. Now he’s taken that mission, to a certain extent, to PORP, which supports the separation of church and state.

McAfee started PORP back in 2010 as a science-based answer to the Tea Party, but he didn’t do much with it. Then Trump — who has made a habit out of stating mistruths that go against scientific consensus and are backed up by no evidence — won the election, and PORP got new life.

With Donald Trump in the lead, I'm preparing to re-launch the political party I created in 2010. Check out The Party of Reason and Progress!

McAfee registered PORP with the IRS as a 527 political organization, got a steering committee of about 20 people (all volunteers, including, he says, McAfee himself), and set about promoting the message. One way to do that, McAfee soon realized, was replying to Trump’s tweets. If McAfee’s tweets made it to the top of the replies under a Trump tweet, they were seen by thousands, if not millions, of people. They were almost guaranteed to go viral. McAfee used Trump’s own preferred medium of communication — one that he says he uses to bypass a mainstream media that twists his words — against him. And to promote PORP.

“It’s a very small part of what we do but it’s much much more successful than I thought it would be,” McAfee says of his tweets. “It’s not really a traditional mechanism for an organization like ours, but this isn’t a traditional president, either.”

McAfee says he ramped up the tweets at Trump after he was inaugurated, at which point he felt Trump and his Twitter behavior should be held to a higher standard. But he did tweet at Trump in the period between his election and the inauguration, and also tweeted about (though not to) Trump during his campaign.

So, the big question: How does McAfee answer so many of Trump’s tweets so fast? He doesn’t use a bot, as many suspect. He has an alert on his phone for whenever Trump tweets and just responds as fast as he can. It helps, he says, that Trump’s tweets tend to come at predictable hours and are about predictable subjects: in the morning, and whatever or whoever Trump is mad at. If someone has said something mean about Trump recently or, say, a federal appellate court has ruled against him, McAfee has a pre-written response to Trump’s inevitable tweetstorm of rage ready to go. And, he says, PORP has a media team that makes a lot of the gifs and images that really tend to take off.

McAfee thinks it’s a combination of speed and the content of the tweets that gets such high placement. The fact that McAfee’s account is verified probably doesn’t hurt either: Most of the responses to Trump that make it to the top come from verified accounts. Gone are the days when whoever got there first also got the best spot, which was usually a bot account trying to sell “liberal tears” coffee mugs. (Twitter did not respond to request for comment on when and if its algorithm changed, but a look at the responses under Trump’s tweets shows they heavily favor verified accounts like McAfee’s.)

Primetime for Trump tweets is in the early morning hours, when Trump presumably wakes up, watches the news (MSNBC or Fox News, he has claimed — NOT FAKE NEWS CNN), and takes to his phone to fire off a round of typically angry and defensive tweets. But McAfee lives on the West Coast, which means Trump’s morning is his middle of the night. That’s not a problem, McAfee says, as he’s often either already up at four in the morning (“I am an early riser”) or else his Trump Tweet Alert wakes him up.

Perhaps a bigger issue is that Twitter now disconnects certain responses from Trump’s tweets, so they stop showing up at all — though usually that’s after McAfee’s tweets have been up for a long enough time to get plenty of engagement. (Twitter also did not respond to request for comment on why and how these disconnections happen.) Then again, some of McAfee’s tweets asking people to retweet posts that were disconnected are among his most-retweeted and liked of all time.

McAfee says he’s trying to use his placement under Trump’s tweets to put real facts and information out there and counteract the falsehoods his president is disseminating, unchecked, to the public.

“In my eyes, I’m just presenting the other side of things from a perspective other than Trump’s, who kind of lives in his own reality,” McAfee says. “The core of my message isn’t to make fun or demean the president or anything like that; it’s just to get people to think and question what he’s saying.” Maybe, but it’s the trolling gifs and images that seem to get the most engagement.

Tweeting may be a small part of PORP, but at this point it may well be where it’s most visible. Around the time of Trump’s inauguration, McAfee’s personal account had about 8500 followers. A few weeks later, he’s approaching 30,000. The party’s Twitter account, started last November, has 18,000 followers. And it’s even more popular on Facebook, with almost 40,000 followers. And there’s also private Facebook group for PORP volunteers that McAfee says has about 20,000 members.

Though some people (okay, a lot of people) may find McAfee’s near-constant presence under Trump’s tweets to be annoying, or even worth sending McAfee nasty direct messages over. (He recently deleted many of his tweets at Trump, saying he was getting death threats.) But he also gets about a hundred messages a day from people who want to know more about PORP. Some, he says, are disillusioned Trump voters.

Who the hell is @DavidGMcAfee and why is he the top reply on every Trump tweet?

“They want to become part of the solution,” McAfee says.

Of course, it’s a longshot that PORP will be that solution, and now that McAfee says he’s leaving the tweets at Trump to PORP’s currently unverified Twitter account, PORP will have to rely on other means to get people’s attention. It’s truly rare that a grassroots political platform wields the kind of influence McAfee hopes his will. But the Tea Party shows it’s definitely possible, and the Women’s March shows there’s interest. If the anti-Trump revolution is born out of Trump’s own tweets, well, that’ll be a special kind of irony.

Some of you have asked me how I handle all the negative comments on my posts. My response: "You still read the comments?!"