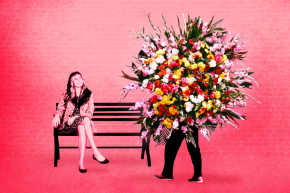 For Newlyweds, Happiness Comes From Being Unselfish
By Tracy Clark-Flory

For Newlyweds, Happiness Comes From Being Unselfish

Even if your partner doesn't notice your generosity — you will

It turns out the old adage “it’s better to give than to receive” is empirically true — at least when it comes to married couples. A new study, published in the journal Emotion, shows that giving to a partner carries with it better emotional benefits than receiving. In fact, giving is beneficial even when partner fails to notice the generous act.

“Our study was designed to test a hypothesis put forth by Tenzin Gyatso, the current Dalai Lama, that compassionate concern for others’ welfare enhances one’s own affective state,” said lead author Harry Reis, a professor of psychology at the University of Rochester in a press release.

Reis and his team surveyed 175 newlywed heterosexual couples every day over the course of two weeks. Participants tracked their daily moods, as well as the amount they had given or received. The researchers were specifically interested in “compassionate acts,” which they defined as “caregiving that is freely given, focused on understanding and genuine acceptance of the other’s needs and wishes, and expressed through openness, warmth, and a willingness to put a partner’s goals ahead of one’s own.”

As the press release puts it, “the acts included such things as changing personal plans for the partner’s sake, doing something that showed the partner was valued, and expressing tenderness for the spouse.” One specific example is given of a husband scraping his wife’s snow-covered windshield — which, you know, isn’t two-dozen roses, but it still counts.

After controlling for other variables, they found that compassionate acts were associated with more positive emotions for both the giver (or “donor,” as the study puts it) and the receiver — but the positive effects on the giver were stronger. And, while a receiver had to actually notice that their partner had given them a gift in order to experience any benefits, recipients benefited regardless of whether their partner was paying any attention to their generosity. As the study puts it, “These results suggest that in terms of emotional well-being, for donors, acting compassionately may be its own reward.”