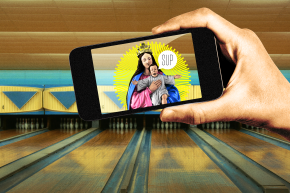 Augmented Reality Is Entering The House Of God
By Alejandro Alba

Augmented Reality Is Entering The House Of God

Using your phone in a place of worship is typically looked down upon. But in a near future, religious patrons might be encouraged to take out their phones, point their camera at the Bible, and watch the story of the sermon unfold in real-time.

Augmented reality (AR) is a consumer tech trend that is picking up speed, with gadgets like Microsoft’s HoloLens and apps like Pokémon Go, and the technology is now entering the worship space, too. Religious institutions all over the world have started to experiment with AR capabilities. Some use it to enhance their weekly brochures or Christmas invitations and others offer tours of their worship temple.

The Turku Cathedral in Finland has a mobile app that uses AR to tell the story of the Protestant Reformation in Finland. Wordsmith, which was built as part of a marketing campaign promoting the 500th anniversary of the Reformation, allows visitors to aim their camera at specific areas of the cathedral and watch the events from the 16th century come to life on their phones.

One company, My Healthy Church, has started using AR apps to animate holy objects such as the bible and crucifixes. Its app Fire Bible for Kids can place cartoon characters onto the pages of the Bible, where they retell the story of Jesus and other religious figures. My Healthy Church distributes books to ministries, but mostly aims to have Fire Bible for Kids as an at-home experience.

More How Augmented Reality Will Change How We Do Everything

AR being used in the church is not as farfetched an idea as it sounds. Some churches have long used technology such as screen projectors and PowerPoint presentations during mass and other services. Church leaders and community members have even started expressing interest in investing in AR, while others have already started brainstorming ideas and creating examples of how it would work.

Paul Amlin, director of youth ministry for the Evangelical Lutheran Church in America, imagines confirmation class instructors talking about apostle Paul’s journey through the Middle East and using AR to overlay buildings, streets and people that Paul encountered along the way. Amlin also sees congregations moving away from projection screens and immersing fully into “mixed reality,” with the use of both augmented and virtual reality.

“Can you foresee a day when congregations will use augmented reality to immerse worshipers in stories from Scripture? What if we were to go over the top and add scents and physical objects that connect thematically to the stories or to the sacraments?” Amlin posits in a Living Lutheran post. “OK, that may be over the top even for me—but isn’t it time we had the conversation?”

David Murrow, director of Church for Men a website that looks into the “man shortage” in the Christian faith, also believes that AR has a future with religion and it’ll help spread satellite churches across the world. A satellite church would work by hosting a real-time sermon or service at physical location, then live-streaming it to other locations via the Internet. For example, someone could be sitting at a church in Texas wearing Google Glasses or Facebook’s upcoming AR glasses and be watching the same sermon that’s happening at a church in New York City.

More Scientists Still Studying Pokémon Go, Months After We All Moved On

All of this is possible because it’s become easier to integrate AR technology, according to Azad Usmani, technical manager at app making website Appy Pie. To put an AR app, people can simply pick a particular object or image, and then assign a photo, PDF, song, or video to appear when someone points their camera phone at it. In the case of the church, it can be the bible, a statue, or a poster on the wall.

AR is still in its nascent stages, but if more communities keep experimenting with it, they’ll be able to change the way the church can engage people, according to Jay Kranda, online pastor at Saddleback Church and co-host of the Social Media Church podcast. Kranda, along with Nils Smith, innovation pastor at Community Bible Church in San Antonio, use their podcast to explore how the church can adopt technology, social media, and the Internet in order to tell better stories.

“I think for a church it’s going to lead to more powerful discipleship experiences, to more compelling weekend experiences, and outreach events,” Kranda said in the podcast’s mixed reality episode.