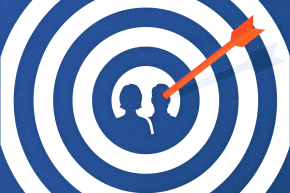 One of the most unsettling questions about using Facebook — which advertisers, exactly, can see your information? — is now a few clicks away.

That option has been available seven years. But now, opening that archive and moving to the “Ads” menu lets you see which ads you’ve ever clicked on, plus a long list of “Advertisers with your contact info.”

Facebook’s business model rests on targeted advertising, where marketers can pay to only target people they think likely to be interested in their products. That’s based on all kinds of data that users give Facebook, such as pages they like, where they check in, and biographical information. Plenty of third-party companies traffic in people’s personal data to sell to advertisers, so the more casual a person is when sharing their personal info — say, their phone number — the more likely an advertiser will be to connect that to your Facebook profile. And websites owned by companies that want to advertise can install a specific Javascript code called Facebook pixel to connect visitors to their site with their Facebook profiles.

Even though I rarely use Facebook and give it only minimal or misleading information, I found that 52 companies have access to my Facebook data in this way. A colleague, who describes herself as a mid-level Facebook user, found that 259 advertisers had her contact information. Some of my advertiser list makes at least some sense — I’ve indeed flown JetBlue and shopped from Amazon, two of the listed companies — but most are a mystery. I find comedian and actress Wanda Sykes funny, for instance, but have never visited her website, nor her Facebook page, nor, to the best of my knowledge, ever discussed her on Facebook. Still, Wanda Sykes is one of the brands with my details.

Facebook’s consistent answer for why it’s become more transparent over the years has been that it wants users to better understand the company’s practices. But some European privacy advocates offer a different answer.

Since 2011, when he was still a student, Austrian lawyer Max Schrems has filed several lawsuits against Facebook for not abiding by European data protection laws, which are usually far stronger than data privacy laws in the U.S. Schrems’s suits have reportedly caused Facebook to halt its facial recognition capabilities, for instance, and he’s created a site, PersonalData.io, which allows anyone to make a legal request for all the data Facebook has on them.

On Monday, Swiss mathematician Paul-Olivier Dehaye wrote that after making a PersonalData.io request, Facebook didn’t give him a list of marketers who could target him. So he initiated legislation for that information and got a message from Facebook on Feb. 7 that the information now included advertisers.

“My conclusion is that Facebook modified its export tool so it could claim in the arbitration procedure that it was already compliant,” Dehaye wrote. “Technically, by the time they responded, this would be true. But of course they only modified the tool so they could claim that and look good in front of the arbitrator.”

Facebook declined to comment on the record why it has made this information available. But legal experts said it seems likely.

“That seems like the best candidate for why that’s happening,” Jim Graves, a law and technology fellow at the Electronic Privacy Information Center (EPIC), told Vocativ. “I don’t know if the court’s making them do this in particular, but if they’re obligated to give one person this information, then it’s more cost-effective for Facebook to let everybody do it. You might as well build that feature.”

If it is indeed the case that Facebook’s increasing transparency is prompted by European legislation, there may be more to come. Schrems is currently litigating against Facebook — backed by EPIC — in Ireland over a similar set of issues.

This story has been updated to reflect the nature of Facebook’s refusal to comment and to correct how long the company has offered the “Download a copy of your Facebook data” option.