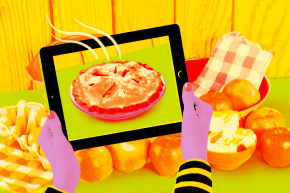 How Augmented Reality Will Change How We Do Everything

Restaurants, museums, shopping — AR is on the rise everywhere from big corporate projects to apps you can make yourself

You’re sitting in an Italian restaurant trying to figure out what to order — the risotto or the ravioli? Instead of just relying on the menu description to make your decision, you pull out your cellphone, open the camera app, point it at the menu, and voilà: Superimposed on your screen, you see exactly what each dish looks like. You’re sold by the image of the rich ravioli smothered in marinara under a blanket of grated parmesan. Someday soon, using your smartphone as a visual aid in restaurants may be standard practice. And that’s just one way augmented reality (AR) will be making its way into our lives.

AR, still in its nascent stages, is slowly becoming a household name. It’s often confused with virtual reality (VR), but there are important differences between the two: VR transports people to real or imagined digital worlds through a headset that is usually tethered to an expensive computer (i.e. Oculus Rift, HTC Vive), but can also be used with smartphones (i.e. Google Pixel, Samsung Galaxy). AR, on the other hand, superimposes virtual images on a user’s view of the world through the camera on their smartphone and is used on everyday apps like Maps.

So far, most people are familiar with AR thanks to Pokémon Go, which successfully implemented the technology to send the entire world on a chase for virtual monsters when it was released last year. Now there’s also Snatch, a mobile game using AR that’s a big hit in the UK. Snatch players grab floating AR parcels with their phones and must wait six hours to find out what’s inside. But in those six hours, the parcel can be snatched by other players. Once the parcel is opened, players find prizes including discounts to stores, food coupons and even actual cash. Upon release in the U.K. in February, Snatch was No. 30 on the overall app charts, No. 1 under Adventure Apps and had more than 130,000 thousand installs in its first three weeks. Soon it’ll be rolling out in the U.S.

But AR doesn’t start and end with gaming. Soon, we’ll be seeing AR everywhere we go. “It will become one of those things that we all do,” said Phil Lloyd, chief marketing officer of Snatch. “In general it’s such an obvious and natural interaction between people and the real world using their cameras and their phones.”

In a recent interview, CEO Tim Cook agreed with that sentiment, telling Bloomberg that we will “have AR experiences every day, almost like eating three meals a day. It will become that much a part of you.” Apple has started looking into AR, according to reports and patents, and it’s speculated that the upcoming iPhone 8 will have AR capabilities. (The company has yet to confirm or deny those rumors, but Apple acquired a German AR software company in 2015, and sources confirmed in news reports that there’s something in the works.) It’s easy to imagine AR features within the maps app and camera filters that overlay objects or even a standalone headset similar to Microsoft’s HoloLens. Some reports have hinted that the iPhone maker is working on AR glasses. Facebook and Snapchat are also rumored to have joined the race to build AR lenses.

While all of these corporate tech companies are working on big AR projects, this technology is already available for anyone to create their own AR app. Abs Girdhar, CEO of app-making platform Appy Pie, told Vocativ that the process is similar to making a website. You simply go to an app making platform like Appy Pie and use default customization to design and build an app. Adding an AR component would be as simple as embedding a video on a website. You would simply upload an image (i.e. movie poster, pamphlet) that would trigger the AR visual and input what information or visual would pop up when people point their camera at it. For example, a user could make an AR app for coupons that when people point their camera at it, discount details are revealed.

Girdhar said his company decided to start using AR because of a client in Denmark who wanted to scan art and show people the price and author of the painting at the museum. From that point forward, more of Girdhar’s customers began to use the technology and got creative with it.

Appy Pie has clients who’ve created AR restaurant menus that show people the nutritional value of each food item available. There are also churches using AR for passages in the Bible, realtors who use it to preview house amenities, artists who’ve made sculptures out of AR and educators that use the technology as an aid in the classroom, according to Girdhar. There is also a 15-year-old student who made an AR app that could scan a 100 dollar bill and tell the history of how it came to be.

When it comes to pricing, it all depends on technical aspects and features of the app. On a DIY basis, Appy Pie charges as low as $15 a month, which works similar to hosting sites like Squarespace and Wix when paying for a domain. It’s the same price for all apps regardless if they use AR features. “We had a single mom with a 5-year-old kid who created an [non-AR] app that shows other mothers nearby playgrounds and event places — and she’s been selling the apps for $3,” Girdhar said. “So people can monetize their apps and sell them on Apple Store or Google Store.”

AR is evolving fast, but there’s a clear vision of where it’s heading next, according to Girdhar. The next thing in AR will be wide availability of geo location features so more apps like Yelp, Sears and Pokémon Go can use location services to send people on scavenger hunts or use it for tours and city navigation.

As of March 2017, there have been approximately 8,000 apps in the iOS App Store and 9,000 apps in the Google Play Store that have AR functionalities, according to Amir Ghodrati, director of market insights at App Annie. Some of the most notable are Pokémon Go, Sears and Ikea — which lets users virtually preview furniture in their homes. Most of the apps using AR fall under the entertainment category — about 17 percent of total app on iOS and 20 percent on Android, according to Ghodrati and App Annie insights. There are also a few AR apps under travel, education, game and local.

“This is the first that this is hitting the mainstream level and people are staring to realize that it is a viable option,” Ghodrati told Vocativ. “AR has the ability to be more than just a gimmick and increase value to the apps that are out there.”