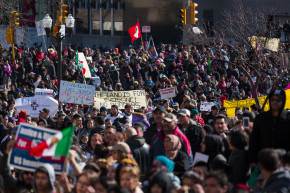 Get Ready For A Nationwide ‘Day Without Immigrants’

Ever wonder what would happen if immigrants in the U.S. stopped working for a day? You're about to find out

Milwaukee’s immigrant-owned shops and businesses shuttered by the dozens this week. Thousands then took to the streets of Wisconsin’s capital, most of them foreign-born. They were line cooks and construction workers, store clerks and students. They had skipped work or cut class to protest recent crackdowns on immigration under President Donald Trump—and to show how critical immigrants are to the U.S. economy.

“We’re looking for freedom. We’re looking for a better life for our families,”  Azarel Arias, a 39-year-old foundry worker and one of the demonstrators, told the Milwaukee Journal Sentinel. “We have to show solidarity.”

Immigrants from around the country will do just that on Thursday. Businesses and workers nationwide are planning to strike as part of a grassroots campaign that’s spread like wildfire if under the radar. Billed in Spanish as “Un Día Sin Inmigrante,” or “A Day Without Immigrants,” the boycott urges both legal and undocumented residents alike not to attend work, spend money, open their businesses, or send their children to school.

News of Thursday's nationwide boycott has largely spread among immigrant communities through word of mouth and on social media.

“There’s a lot of people who don’t recognize what we do for this country,” said Adan Rodriguez, 26, who is organizing friends and neighbors in Chicago. Born in Mexico, Rodriguez said he came to the U.S. legally in 2003. He completed an associate degree at St. Augustine College last year while working full-time as a landscaper in the city’s affluent northern suburbs.

Speaking to Vocativ on Wednesday, Rodriguez focused on immigrant workers who are integral to the U.S. workforce. “Who built your house or picked that fruit in the supermarket? Who cooked the food in your favorite restaurant?” he said. “This is about giving people who are in the shadows of the system a voice.”

Like many of the foreign-born men and women who labor in low-wage professions, planning for the protests has occurred largely outside the view of the mainstream public. It hasn’t attracted the deluge of press coverage that preceded the Women’s March last month. Nor was the campaign hatched by the types of activists and professional advocacy groups that helped organized Monday’s protest in Wisconsin.

Instead, the campaign’s spread through word of mouth and on social media. Family members have swapped text messages as co-workers conversed. Fliers passed hands and circulated online. And there’s been no shortage of people promoting “Un Día Sin Inmigrantes” on Facebook.

Rodriguez said he first heard whispers of Thursday’s demonstrations from a cousin living in Portland, Oregon. Intrigued, he published a three-minute video online last week that called on people to join. It exploded. Nearly 5 million have watched Rodriguez’ video since a group that advocates for immigration reform shared a version of it on Facebook. It’s been shared more than 180,000 times.

Images and video from Milwaukee’s demonstration, which attracted an estimated 20,000 people, has also helped build more momentum and excitement in recent days among immigrant communities. Local Spanish-language radio stations have started to list the names of area businesses that are planning to participate.

“I want the Latinos to feel empowered,” said Maria Castillo, who is spearheading the boycotts planned in Wilmington, North Carolina. “We are here for a reason. We help the United States in a major way.”

At least a dozen popular restaurants in Washington, D.C., including those of famed chef José Andrés, have now announced that they will close in solidarity of their largely-immigrant workforce. Eateries in Austin, Philadelphia, and St. Paul, Minnesota, plan to follow suit. In Chicago, nearly 500 people have already RSVP’d to attend a rally at Union Park on the city’s west side.

"We believe that real changes happen when the community unites in the same voice," reads and announcement from Latino-owned J&K Tire and Auto Service in Memphis, Tennessee, which will close on Thursday. "It is time to support us and say how important our contribution to this society is."

Boycotts and demonstrations are also expected to take place beyond large liberal enclaves and places traditionally known for active immigrant communities. At least 70 Latino-owned business in Des Moines, Iowa, have pledged to close for the day, including restaurants, salons, and ice cream shops, organizers said. Columbus, Ohio, could see supermarkets and construction companies shut down. And an auto repair shop in Memphis, Tennessee has already started to inform clients that it won’t be open on Thursday.

“We believe that real changes happen when the community unites in the same voice,” the announcement at J&K Tire and Auto Service reads. “It is time to support us and say how important our contribution to this society is.”