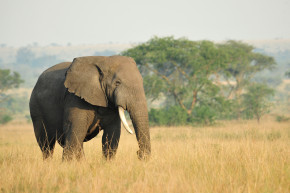 While the negative impacts of climate change are well documented in the scientific community, a new study shows that its negative impact on endangered and threatened species has been extremely overlooked. A team of researchers writing in the journal Nature Climate Change say that almost half of the mammals and a quarter of the birds of the IUCN Red List of Threatened Species are affected by climate change — previous literature stated only seven percent of mammals and four percent of birds were impacted, marking a major increase.

The animals that were overlooked share similar traits with those that are known to be affected negatively by climate change. “This implies that, in the presence of adverse environmental conditions, populations of these species had a high probability of being negatively impacted by recent climatic changes,” the authors say.

The paper analyzed more than 130 studies about mammal and bird populations’ response to climate change. It showed that mammals and birds are susceptible to climate change in many ways. For example, primates and elephants, two mammals that have particular slow rates of reproduction, are more susceptible to rapid changes in their environments. For birds that live in aquatic environs, they are more vulnerable to increases in temperature, as well as habitat loss.

Additionally, out of the 11 orders of mammals analyzed, only two were seen to benefit from climate change in any way (rodents and insectivores). The study added, however, that “birds showed the opposite trend with only three orders out of 19…having more species with a predicted negative impact than not.” Those types of birds living in habitats already under threat, such as forest areas, will likely see further negative impacts due to climate change.

“Our results clearly show that the impact of climate change on mammals and birds to date is currently greatly under estimated and reported upon,” co-author James Watson, of the Wildlife Conservation Society and University of Queensland, said in a statement. “We need to greatly improve assessments of the impacts of climate change on species right now, we need to communicate this to the wider public, and we need to ensure key decision makers know that something significant needs to happen now to stop species going extinct. Climate change is not a future threat anymore.”

The authors advise that conservation efforts focus more on the current effects of climate change and how it is currently impacting lifeforms.