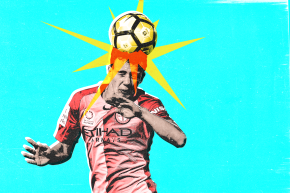 The most popular sport in the world may come with major drawbacks for long-time players. A new study published Tuesday links soccer to significant brain damage in a handful of deceased athletes.

From 1980 to 2010, researchers kept track of 14 retired, mostly professional soccer players who had been stricken with dementia up until their deaths. Afterwards, they obtained permission from the families of six to study their brains. They found that all six had various neurological conditions, including Alzheimer’s and Lewy body disease. Four had clear-cut chronic traumatic encephalopathy (CTE), a condition linked to repetitive head injuries that has been documented among many kinds of athletes.

The study, the first of its kind to look at soccer players before and after their death, is only the latest bit of evidence to show a link between CTE and soccer. It’s also the first to confirm a group of CTE cases, which can only be diagnosed definitively by examining the brain after death, according to lead author and University College London neurologist Helen Ling. Previously, there had been four isolated case reports of players examined after death, with three confirmed to have CTE.

All 14 players had long careers spanning two to three decades, often beginning in their childhood. The sole amateur, known only as case 4 in the paper, had also played regularly for more than 20 years starting at the age of 10. He was also the youngest to die, at the age of 60, after five years of memory loss, hallucinations, and worsening dementia. Twelve players in total ultimately died as a result of their declining brain health.

Though CTE is the condition most associated with sports head injuries, the researchers said, the other types of neurological damage seen in the players have also been linked to them, often accompany a diagnosis of CTE. These conditions all involve the irreversible clumping together of misshapen proteins in the brain, though they differ in where this build-up happens or which proteins are implicated. Both CTE and Alzheimer’s, the latter found in all six autopsied players, are thought to be caused by the accumulation of a protein called tau.

This study is still only a piece of the puzzle in understanding the link between sports-related head injuries and later disease, said Ling. According to research cited by the team, as much as 12 percent of the general senior population could have signs of CTE. But while rates of CTE were higher in the current study, experts simply don’t know how much riskier soccer-playing could be compared to not playing sports at all. “[I]t is important to note that we only studied a small number of retired footballers with dementia and that we still do not know how common dementia is among footballers,” Ling explained in a statement.

Also unsolved is how soccer players could be getting CTE in the first place. Only six players reported getting a serious concussion during their career, and each only reported a single one. Meanwhile, at least half played at positions that required them to frequently head the ball, and other studies have estimated that a player could head the ball more than 2,000 times over a 20-year career. More recent research has also shown that frequent heading can cause concussion symptoms comparable to those caused by head injuries. But again, it’s impossible to say at this point how much a danger heading is compared to more dramatic, accidental head impacts.

The only thing that’ll settle that debate and other questions is more large-scale research, the researchers said.