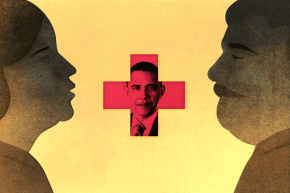 How Obamacare Reduced The Nation’s Divorce Rate
By Alexandra Ossola

No divorce needed to qualify for Medicaid? Thanks Obama

For years, our nation’s health care system seemed to be driving people to divorce. Stories swirled of patients under the age of 65 who were diagnosed with serious (and expensive) medical conditions who divorced their spouses in order to fall below the maximum asset level to qualify for Medicaid. That way, the government would pay for the patient’s treatment, and the surviving spouse wouldn’t have to spend his or her retirement funds to do so.

This is why the Affordable Care Act, by allowing states to expand Medicaid, helped millions of Americans not only get health insurance, but also “saved” marriages. Spouses who previously would have gotten divorced to qualify could now stay together and still be covered under Medicaid.

That is, at least, what a pair of economists hypothesized. They tested their theory in a new study, published Monday on the web site of the National Bureau of Economic Research. Their technique was fairly simple —they looked at the state-by-state divorce rate between 2000 and 2015 for couples between the ages of 50 and 64, excluding the 10 states that opted not to expand Medicaid and the years 2012 and 2013, when the timelines of Medicaid expansion were in flux. They focused on this age group because “they likely have been married for a number of years, have substantial assets, are at greater risk of a degenerative medical condition, and are eligible for the Medicaid expansion,” the study said.

In 2014 and 2015, after the ACA was enacted, the states in which Medicaid was expanded had a much lower divorce rate than the states that did not expand Medicaid. Overall, the researchers found a 5.6 percent drop in divorce rates in this age group.

It’s impossible to know for sure whether Medicaid expansion caused the drop in divorce rates. We don’t know how common Medicaid divorces were before the ACA was implemented, and the divorce rate nationwide has been slowly dropping for a while anyway. Unemployment also dropped during that period, which often correlates to lower divorce rates. Still, the researchers write that their findings are “robust.” If the researchers are right and Obamacare is repealed, as President Trump and Republicans have vowed, we may see the divorce rate tick up again.