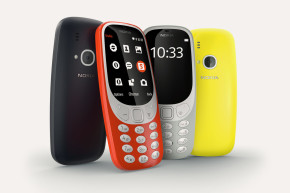 It didn't break if you dropped it. It made calls really well. It had the 8-bit game "Snake." What's not to love?

Before the iPhone, the Blackberry and the Motorola Razr, there was one phone that was all the rage in the new millennium: the Nokia 3310. Now, 17 years after its was first released, Finnish manufacturer HMD Global Oy is re launching the “indestructible phone.”

A modern version of the classic Nokia 3310 is expected to be unveiled at the Mobile World Congress in Barcelona later this month, according to renowned leaks reporter Evan Blass. The phone is getting resurrected by HMD, since it owns the rights to market Nokia brand phones.

The 3310 got its “indestructible phone” nickname for being extremely durable, tolerant to weather and the outdoors and having a battery life that would last days. Lots of memes have been made in the phone’s honor — just Google the name. The 3310 also became an icon for having interchangeable covers, becoming the staple cellphone prop in Hollywood films and having the 8-bit game “Snake.”

HMD is expected to be sell the 3310 for €59, which is about $63. It’s still unclear if the “dumb” phone will become available in the U.S. or if it’ll be explicitly targeting the European marketplace.

How much of a modern upgrade the new release will get is also unclear, but one can only hope that it’s just as durable. The new Nokia 3310 will compete with other low-end starter phones, which very few people have. But even if it doesn’t have a giant appeal as the cool thing to own, it’ll definitely be used a burner phone.