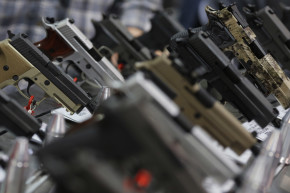 The Senate voted Wednesday to nullify part of a gun control bill that keeps severely mentally ill people from buying guns. It’ll head now to President Donald Trump, who is likely to sign it.

The rule, which was issued by the Obama administration, required the Social Security Administration to report the names of an estimated 75,000 people who are considered too mentally ill or otherwise unable to manage their own disability benefits to the national background check system that gun stores (but often not private sellers nor gun shows) must consult before selling a gun to someone. It went into effect in January of this year, and but didn’t require compliance until December.

Sen. Chris Murphy, a Connecticut Democrat who’s long supported gun safety, opposed the vote. “If you can’t manage your own financial affairs, how can we expect that you’re going to be a responsible steward of a dangerous, lethal firearm?” Murphy asked. The bill passed 57-43, with several Democrats crossing the aisle to join Republicans.

The House voted against the rule on February 3.

Federal law already bans the sale of guns to the mentally ill, but doesn’t require states to report people with records of mental illness (being committed to a mental hospital, for instance) to the background check system, so they often don’t. That was a loophole that the federal mandate to the Social Security Administration could have, ideally, partially closed.

The vote has been criticized by gun control advocates who believe it’s important to keep deadly weapons out of the hands of people deemed too severely mentally ill to manage their own disability benefits.

But, the rollback has supporters from several camps; both the National Rifle Association and the American Civil Liberties Union supported the disapproval, with the ACLU saying the rule assumed that all people with severe mental illnesses were violent and lumped them all together as one group rather than judging them as individuals.

Sen. Charles Grassley, a Republican from Iowa, voted to strike down the rule. “If a specific individual is likely to be violent due to the nature of their mental illness, then the government should have to prove it,” Grassley said.