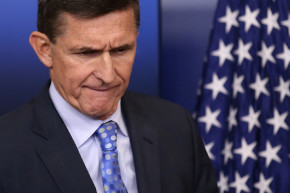 Many white nationalists and members of the "alt-right" viewed Michael T. Flynn as a force for good

White nationalists commenters on the internet are upset by the sudden resignation of President Trump’s national security adviser Michael Flynn, who many in the “alt-right” corners of the internet view as somewhat of a hero. Flynn, a retired U.S. Army Lt. General, quit late Monday after reports that he’d lied to Vice President Mike Pence and other White House officials over the details of his communication with Russia’s ambassador to the United States.

Disappointment over Flynn’s resignation, 24 days after assuming the role, was felt widely in internet discussion boards like Stormfront and The Daily Stormer, popular forums for white nationalists and card-carrying racists. Members blamed everyone from the media, Mike Pence, the intelligence community and Jews.

Andrew Anglin, creator of the neo-Nazi news blog The Daily Stormer offered his own commentary, labeling Flynn as “one of our best guys,” and describing the resignation as “definitely a loss. To the Jews.” The website’s readers agreed, several called Flynn “the kind of person we need on our team,” “stand up,” and that he was “too pro-white” for the administration.

Michael Flynn was no stranger to controversy prior to his conversation with the Russian ambassador. He used his social media account to spread numerous fake news stories and conspiracy theories relating to Hillary Clinton and former President Barack Obama.

Reports of Flynn’s link to the alt-right movement surfaced shortly after he was tapped to serve as Trump’s national security adviser. CNN reported in November that Flynn regularly tagged alt-right figure and conspiracy theorist Mike Cernovich in his tweets and even endorsed one of his books.

Flynn has endeared himself to the alt-right’s online community with inflammatory remarks about Islam and by leading the “lock her up” chant during his speech at the Republican National Convention.