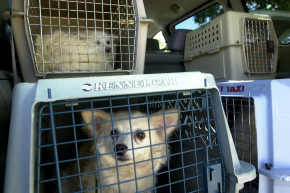 On February 3, two weeks after the Trump administration took office, the Animal and Plant Health Inspection Service (APHIS) removed public access to a database documenting outcomes of investigations of nearly 8,000 facilities that legally keep animals, such as research facilities, zoos, pet stores. Animal rights activists and journalists had been using that information to follow how the government regulates organizations, according to the Washington Post.

APHIS, citing a need to be “protecting personal information,” said the public could still request those documents through a Freedom of Information Act request, which is a slow and highly unreliable way of retrieving information (especially since FOIA requests will no longer be accepted if they are submitted via email).

The USDA was one of several government agencies to remove publicly available information after Trump took office, though the USDA statement said the review of the information on its site had been ongoing over the past year.

Amid public outcry, a spokesperson told Science Magazine further explained a few days later:  “APHIS is currently involved in litigation concerning, among other issues, information posted on the agency’s website. While the agency is vigorously defending against this litigation, in an abundance of caution, the agency is taking additional measures to protect individual privacy. These decisions are not final. Adjustments may be made regarding information appropriate for release and posting.”

Still, advocates for both animal welfare and animal use in research were dismayed. “When information is hidden, particularly where it was once available, the public will naturally wonder why many stakeholders have cause for concern: the public wonders what is being hidden and why, and researchers must devote even more resources to combatting the public perception that they are not transparent,” wrote the editor of animal research advocacy group Speaking of Research.

On Monday, six animal rights and public health advocacy organizations, such as People for the Ethical Treatment of Animals (PETA), Born Free USA, and the Massachusetts Society for the Prevention of Cruelty to Animals, filed a lawsuit in the district court for the District of Columbia against the USDA. In removing the records from its web site, the complaint reads, the USDA inhibits watchdog groups from understanding how well the agency is enforcing the Animal Welfare Act. Removing the records is illegal, the plaintiffs claim, because federal law requires the agency make frequently-requested documents available electronically. The plaintiffs demand that the USDA return the records to the web site, plus pay for their legal fees.

A USDA spokesperson told Vocativ that she is unable to comment on pending litigation.