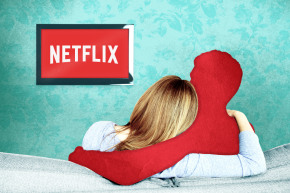 Netflix Cheating Is Common, But Is It Really All That Bad?
By Allee Manning

Netflix Cheating Is Common, But Is It Really All That Bad?

Almost half of couples that binge-watch together have been disloyal

In the digital first-world, there are many more ways to be unfaithful to your significant than in the past. One way that people go online to betray the unwritten rules of relationship fidelity is by “Netflix cheating,” i.e., the practice of surreptitiously watching episodes of a TV show you’re supposed to be watching together.

The study, which was commissioned by Netflix and conducted by SurveyMonkey using data from 30,267 respondents, found that nearly half — 46 percent — of couples that stream together have at least one person watching their TV shows ahead of the other.

The last time Netflix conducted such a survey was in 2013, when they found that just 12 percent admitted to having done so. While the practice is on the rise, it still feels like a stretch to say watching a TV show constitutes “real” cheating. Still, Julie Spira, a relationship and dating expert, says that it does.

“There are lots of forms of cheating,” she said. “Anything that you’re doing that your partner doesn’t know about that you think would make them uncomfortable is cheating.”

If you and your significant other religiously watch a netflix show, and you watch an episode with out him/her, I count that as cheating.

Though this may seem like an extreme reaction, Spira — who herself confessed to being unable to keep from watching the next episode of “Breaking Bad” without her boyfriend once — says that this habit really is a violation of trust that can negatively affect relationships.

“There’s such a bonding experience when you’re binge-watching a show with your partner and it brings couples closer together because you’re creating a ritual that you share together,” she said. “If one person decides to sneak a peek and they don’t tell [the other person] and they watch it together as if they’d never seen it before if it happens more than once it can be a big issue.”

The survey’s findings show that 45 percent of people who’ve “Netflix cheated” didn’t confess to the indiscretion, and over 60 percent said they’d do it more if they knew they’d get away with it. (Damn the pesky indicator bar that shows how much of a video has been watched!)

According to Kimberly Moffit, a relationship expert and psychology doctorate, this mentality is a bit concerning. “It can represent a breach of trust, even though it seems small,” she said.

My boyfriend watched our netflix show without me. SIX WHOLE EPISODES. We might have to break up.

However, she did note that the apparent 14 percent of people who said they think that this form of cheating is worse than having an actual affair may be blowing things out of proportion (Vocativ wonders if the respondents really were serious with this answer).

“Television has the ability to wrap us up so intensely that we’re so curious about what happens next, and it’s so easy to hit that play button,” she said. “But to have a full-on affair is a lot harder. There’s a lot more deception involved. And to physically engage in something with another human being that’s not your partner, in my opinion, takes a whole new level of deception and intention that watching a program wouldn’t.”