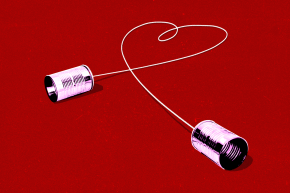 Citing swiping exhaustion, Hotline is taking it old-school. Young people are going to be very confused

Dating apps like Tinder and Bumble have introduced a unique way of looking for a soul mate but have also brought on an epidemic of “swiping fatigue,” the exhausted state in which profiles all blend together and finding a match feels impersonal and robotic.

Now a new dating app wants to provide an antidote by forcing users to revert to a traditional way of getting to know each other: the old-fashioned phone call.

“Hotline,” released just in time for Valentine’s Day, ditches the swiping of profile cards and forces people to engage in a minimum five-minute phone call in order for them to proceed to texting and eventually meeting in-person.

The concept is a purposeful throwback to how people would set up dates in the many decades before the Internet (remember personal classifieds in the newspaper?). Today’s dating apps have become an additive, rapid fire experience, and that can be part of the problem for people seeking meaningful relationships. Founder Sam Ballantyne believes talking is the only way to have a genuine connection.

Ballantyne stumbled onto the idea Hotline after a match on another dating site sent him her number and said she only wanted to talk over the phone, according to Hotline’s publicity director Rose Dawydiak-Rapagnani. He eventually gave her a call, and they stayed on the phone for about two hours, then dated for about three months.

“We don’t want people to stay on Hotline,” Dawydiak-Rapagnani told Vocativ. “We want people to use hotline to make a meaningful connection then get off the app.”

The app was just released Monday, but the company conducted a beta test in January with 500 participants to see if the concept would actually work. It’s still too early to talk about any love story successes yet, said Dawydiak-Rapagnani.

During the beta test, calls between matches lasted about 25 minutes on average, but the longest call clocked at 40 minutes. Two people must mutually match before calling is enabled, and, of course, all calls were done within the app. Using your own number with a stranger looking for “love” is creepy and could potentially lead to trouble.

Those who sign up have to create a profile that features a small video clip of them saying hello and an additional audio recording that welcomes others to like and call them. They can also add photos, a list of interests, and general bio information just like on all other dating apps.

However, unlike many other apps, Hotline does not have a free version. It’ll cost users $9 a month to find matches and they’ll only be able to select three at time. Dawydiak-Rapagnani said the limit is to help people focus on those matches and not feel overwhelmed with options, which leads to swiping fatigue. Think of it as holding three cards and having to put one down in order to get a new one.

“We think the cost of a beer or wine to find a meaningful relationship is worth it,” Dawydiak-Rapagnani said.

The Hotline app is only available in New York City for iOS, but they plan to eventually roll it out in other big cities across the U.S.