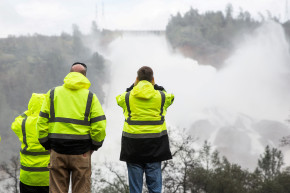 State employees monitor water flowing through a damaged spillway on the Oroville Dam. — REUTERS
By Jacob Steinblatt
Feb 13, 2017 at 6:18 AM ET

Hundreds of people are offering assistance to the thousands of Oroville, California residents and pets that had to be evacuated after a hole was discovered in the Lake Oroville Dam spillway. The damage in the dam threatens to flood Oroville and other nearby towns, prompting authorities to order the evacuation of 188,000 people.

In response, Vocativ found hundreds of residents of adjacent towns and counties offering space in their homes, places of worship, and campgrounds for the Oroville refugees. In Facebook groups like Butte County Fires, Accidents, Crimes and Oroville Current Events locals are sharing notices of safe refuge as well as regular updates on the dam’s status.

One Facebook user consolidated offers of help onto one page, “Oroville Dam Evacuation Help,” which received nearly 2,500 likes and dozens of posts within six hours. Churches, animal hospitals, ranches, houses, and even a martial arts training center are opening their doors to those displaced from their homes.

Facebook is often people’s first source for news and assistance during natural and man-made disasters. The website also opened an official page for quick disaster response. Facebook offers a “safety check” for people to let others know they are safe during disasters and terror attacks. People all over the world organize over Facebook to help those who have lost their homes, for example, during the deadly Italian earthquakes in the summer of 2016, when thousands banded together to gather supplies and open their homes to victims.