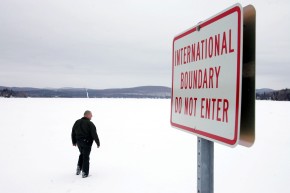 Refugees Are Crossing The U.S. Border Into Canada
By Leeron Hoory

Refugees Are Crossing The U.S. Border Into Canada

Last weekend, 22 asylum seekers jumped the border into Canada arriving at a small town of 700 people

It turns out the United States isn’t the only country north of Mexico with a flow of undocumented immigrants at its porous borders. Twenty-two refugees over the weekend crossed the U.S.-Canada border at the tiny town of Emerson-Franklin, where there is a population of 700 people.

The town struggled to collect the resources to accommodate the incoming migrants, prompting civic leaders to hold a meeting to address how to best handle the influx of migrants from the U.S.

“We are all willing to work together. There has been no negativity. If there is more influx of bigger groups coming through, they assured us that they will have the manpower to handle an influx of refugees,” said Emerson official Greg Janzen, who was quoted in Metro News, a daily local news outlet.

The refugees were given shelter at the town hall, and Janzen said that the border services agency will rent the hall if needed in the future. The Manitoba Interfaith Immigration Council, Manitoba’s largest refugee resettlement agency, provided pillows blankets, first-aid supplies, and other necessities.

In the months following the U.S. election, there’s been a spike in the number of refugees crossing the border, particularly from Ghana and Somalia, one of the seven countries in Trump’s “Muslim ban.” The risk their lives under freezing temperatures to cross the border into Canada and they often arrive frostbitten and hungry.

A bartender quoted by Metro News said that since he started working three years ago at the Emerson Hotel, which is the first stop for many refugees after crossing the border, at least 25 of the 40 border jumpers he’s met came in the months after the U.S. election.

“They’re cold. They’re wearing their winter boots and their winter gear, but they’re cold,” Wayne Pfiel told Metro News. “They end up taking their boots and socks off right in the lobby or else I’ll let them in the bar and offer them a coffee and something to eat.”

To those fleeing persecution, terror & war, Canadians will welcome you, regardless of your faith. Diversity is our strength #WelcomeToCanada

Trudeau has made refugee resettlement from Syria a top priority, and to date, the Canadian government has accepted over 40,000 refugees since November 2015.

One of the reasons asylum seekers are avoiding coming into Canda from an official entry is the because of the Canada-U.S. Safe Third Country Agreement, which states that refugees seeking protection must make a claim in the first country they arrive. This means that if they already applied as a refugee in the U.S. when they arrive at the border of Canada, they will be turned away, unless they qualify for the exceptions. This explains why refugees are reluctant to show up at Canada’s main points of entry, and instead opting to cross over illegally. There has been pressure on the Canadian government to repeal this agreement after Trump got elected, but they have so far refused.

Trudeau is expected to meet Trump in the White House for the first time on Monday.