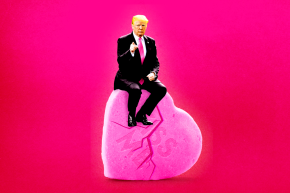 Thanks To Trump, Valentine’s Day Is No Longer Sexy
By Tracy Clark-Flory

Thanks To Trump, Valentine’s Day Is No Longer Sexy

The leading professional organization for therapists and sex educators says this year's holiday should be about sexual rights, not sex

Valentine’s Day has always been about sex — whoops, love. But, for many, this February 14 feels neither sexy nor particularly loving, thanks to political events from the confirmation of Health and Human Services Secretary Tom Price, a man who tried to block women’s birth control access, to Donald Trump’s ban on immigrants from Muslim-majority countries. So, this year, sex educators and therapists are calling for Valentine’s Day to have a different focus: Instead of talking about sex, we need to talk about sexual rights.

“In a year in which the rights of sexual and gender minorities have been increasingly challenged, and reproductive health and rights are frequently in the news, this Valentine’s Day needs to be about more than just ‘sexy time,'” said the American Association of Sexuality Educators, Counselors and Therapists (AASECT), the major professional organization for sex educators and therapists, in a press release.

More Let’s Not Forget How Awful Pence Is For Women

The press release does not mention Trump by name — but, of course, he’s there, as is his administration and the Republican party as a whole. It states that AASECT “opposes all psychological, social, cultural, legislative and governmental forces that would restrict, curtail or interfere with the fundamental values of sexual health and sexual freedom that we espouse.”

What forces would try to restrict sexual health and sexual freedom? Well, Trump’s Supreme Court pick, Neil Gorsuch, has argued that employers should be able to deny contraceptive coverage to employees and believes, incorrectly, that contraception causes abortion. His vice president, Mike Pence, is rabidly anti-choice and, as governor of Indiana, signed a law banning abortion in cases of “genetic abnormality” and defunded Planned Parenthood in his state. Trump himself plans to overturn the Affordable Care Act, which promises free birth control to most women. Republicans, who now also have majorities in the House and Senate, have long sought to defund Planned Parenthood, which provides sexual and reproductive healthcare — including everything from STI testing to sex education — to millions of Americans.

The release goes on to say that AASECT is against “all abuses of sexuality including, but not limited to, harassment, intimidation, coercion, prejudice and the infringement of any individual’s sexual and civil rights.”

The subtext, of course, is a president who has bragged about sexually assaulting women and has been accused of harassment and sexual assault by several women, including his ex-wife (although she later said she didn’t mean it in a “literal or criminal sense”). As far as prejudice goes, Trump has hinted that he would appoint Supreme Court judges who would overturn marriage equality, and Pence signed a bill as governor to allow businesses to discriminate against the LGBT community. Infringement on civil rights? Trump has supported North Carolina’s HB2, which restricts transgender people from using the bathroom consistent with their gender identity.

These are but a few examples of the many reasons that this year’s Valentine’s Day calls for a little something more than candy hearts and lingerie. As AASECT puts it, “[We] would like to wish the citizenry of the United States a happy, healthy Valentine’s Day, but more importantly want to affirm the fundamental value of sexuality as an inherent, essential and beneficial dimension of being human.”