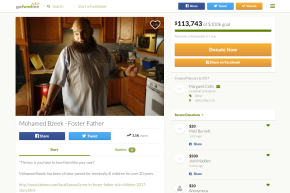 The story of Libyan-born Mohamed Bzeek strikes a chord, as Trump wants to ban immigrants from his country

A recent L.A. Times profile on Mohamed Bzeek, a 62-year-old Libyan-born American who has been caring for terminally-ill foster children for the past two decades, has been met with an outpouring of donations from across the country.

The emotional story, written by Pulitzer Prize-winning journalist Hailey Branson-Potts, tells of how Bzeek is the only person in Los Angeles County who takes in such high-need children, even while also caring for his own developmentally disabled son. Bzeek is currently fostering a 6-year-old girl with a rare brain defect that causes daily seizures and has left her blind, deaf, and mostly paralyzed. With the exception of the time he spends at the mosque, when a hired nurse cares for her, he spends the rest of his time by her side at their home or the hospital.

The story was published on February 8, just one day before an appeals court ruled against reinstating President Donald Trump’s executive order to prevent immigrants and refugees from seven predominantly Muslim countries (including the one from which Bzeek emigrated from in 1978). That same day, a reader touched by the story of Bzeek’s “faith, gentleness, dedication, and love for his children” at a time in which she was feeling “overwhelmed and disturbed by the hate speech [she] was seeing on the internet” created a GoFundMe to benefit him and his family.

“So much of the fear in this country is based on pure ignorance. I’m 52, and until a year ago, I had never known anyone who was Muslim. (As an aside, I’m Jewish),” she wrote. “The primary aim was to honor Mohamed, and to bring in financial support for his family. (Having a disability is really expensive!)”

Bzeek, who is licensed to medically care for children with these kinds of health concerns, receives $1,700 per month to do so.

In under 24 hours, the fundraising campaign both hit and surpassed its set $100,000 goal. According to a press release from GoFundMe, donations were made by Americans in every state. The biggest single donation was for $2,500. As of 1:00p.m. EST, the total donations surpassed $113,000.

“The campaign for Mohamed Bzeek is one of the all-time fastest growing campaigns on our platform,” a GoFundMe spokesperson told Vocativ in an e-mail.

In addition to financial support, some people went online to offer in-kind donations as well. Among them was Manny Godoy, a local funeral director offering to help perform services free of cost. According to the article, Bzeek has buried approximately 10 children in his time as a foster father.

“Since so many of his resources go into the care of these kids, not just financial but things you can’t put a monetary value on, and as a father myself it resonated strongly,” Godoy told Vocativ. “We don’t want this man to ever worry, when something happens, about the resources or funding and make sure that his kids are laid to rest with the same amount of love and dignity that he’s shown to them.”

“The loss that a parent experiences…that child is your everything,” he added. “The loss that they go through is on such a completely different level, even when it’s expected.”

According to an update from Bzeek’s son Adam, who has brittle bone disease and dwarfism, the family can “not thank everyone enough for their precious donations and may God bless their beautiful hearts.”

.@latimes readers have donated more than $100,000 to Mohamed Bzeek, who cares for dying kids. There are no words. https://t.co/Fd8SlsppZE