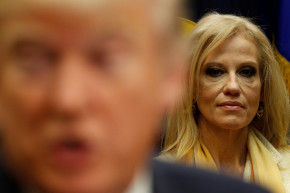 Kellyanne Conway’s ‘Commercial’ For Ivanka May Violate The Law

“It’s a wonderful line,” Conway said. “I’m going to give a free commercial here. Go buy it today, everybody.”

It seems that Conway will now spend Thursday afternoon, and possibly much longer, fending off ethics complaints, since, according to Citizens for Responsibility and Ethics in Washington, her ‘free commercial’ is a violation of federal law prohibiting public officials from using their office for their own private gain or the private gain of others. “Others” includes the president’s daughter.

“It’s hard to find a clearer case of that kind of misuse of office than we saw today,” CREW executive director Noah Bookbinder told Vocativ in a statement. Accordingly, CREW has filed an ethics complaint against Conway with the Office of Government Ethics.

The complaint accuses Conway of violating laws prohibiting the use of public office for private gain and using public funds for purposes they were not intended. As a public employee who salary is paid by the taxpayers, Conway’s official duties do not include shilling the president’s daughter’s shoe line.

CREW is asking the OGE to investigate and discipline Conway if it finds she was in violation of federal laws. Trump has tweeted his rage at Nordstrom for pulling his daughter’s brand from its stores, calling her a “great person” who was “treated unfairly.” The @POTUS account then retweeted him, and press secretary defended him, saying he “has every right as a father to stand up for” his adult children when their clothing lines stop being sold by department stores. Ethics experts have said Trump’s tweet may also be an ethics violation, and Sen. Bob Casey cheekily cc’d the OGE on Trump’s tweet.

As of press time, the OGE’s website had been down for several hours.