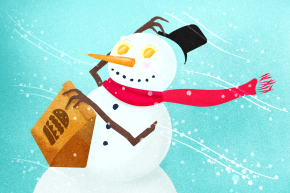 Seamless In A Snowstorm: The Data Is In, And Our Tipping…Isn’t Great
By Allee Manning

Seamless In A Snowstorm: The Data Is In, And Our Tipping…Isn’t Great

Do we tip better when weather conditions get bad? Or are we all just abominable snow monsters?

Most people seek to stay cozy inside when it’s snowing and often that means ordering lunch or dinner delivered. The convenience of online and app food delivery services make this option all the more appealing. But for the delivery people working in these cold, icy conditions — who can be easily overlooked through the automated ordering experience in which tipping is often done in advance — these days can suck pretty hard.

There has already been much ink spilled about the ethics of ordering delivery during a snowstorm. One of the obvious pieces of advice for those who simply must get their pizza or Chinese food fix is to tip generously. But do we? Do we really?

According to a Vocativ analysis of data collected by online and mobile food-ordering company Grubhub/Seamless from snowy days across several cities from the past three years we now have a definitive answer: No, not really.

During the most recent snowstorm, winter storm Niko, which hammered the northeast and shut down schools and grounded flights in New York City, Philadelphia, and Boston, the average tip was 18.6 percent. Seamless/Grubhub ordering options allow users tipping with a credit card to select between 15, 20, 25, and 30 percent, or write in a custom tip, which means that people cozied up in their homes or offices mostly chose the lesser tip amounts given the available options. Looking at past snowstorms in Northeastern cities, past data shows that people will typically tip only as much as 2 percent more, on average, even with 19 inches of snow coming down. Sometimes, people even tip less than usual.

There have been plenty of guides published in regard to tipping in bad weather. The site tipthepizzaguy.com recommends 15 percent for normal service with at least $1 more for inclement weather delivery. Gizmodo recommends 35 percent, and a Grubhub Inc. spokesperson suggested “at least above 20 percent” in 2015. (As a reminder, delivery people do not have to be paid minimum wage under federal regulations.)

“There is probably no ethical obligation to give a tip. Even in inclement weather,” Adam Potthast, co-author “Ethics For Dummies” and philosophy professor told Vocativ in a Twitter message. “But most of us want to live in a world where hard and dangerous work is rewarded by bigger rewards. By ignoring the opportunity to tip (if you have the means) in such weather, you pass up an opportunity to create the world we all want to live in. That’s irrational. An ethicist like Immanuel Kant would say this violates one of our ‘imperfect duties’ to help others when we can.”

According to Josh Arbo, a 25-year old living in the suburbs of New York City who has five and a half years of delivery experience, whether or not people tip better during inclement weather is pretty much a crapshoot. This is the case despite the fact that these days are always far busier.

“It depends on the person,” he said. “People don’t seem to care that much, unless it’s coming down really hard. Sometimes it doesn’t even matter.”

He said this was the case in both his first pizza delivery job, which exclusively accepted phone orders, and his current job, delivering for a sushi restaurant that does use online ordering services. Recalling a recent instance driving in wet snow that had him scared he was going to crash, even with all-wheel drive, he said that some tips were meager.

“I was driving to people’s houses, having a lot of trouble getting up hills,” Arbo said, describing an instance in which someone stopped in front of him driving uphill, causing him to lose momentum. “So there I was slamming it into first gear and sliding around. I hit the curb and cracked my hubcap and then I get to the person’s house which is like 500 feet from where I hit my hubcap and they gave me like four bucks, my worst tip of the night. It doesn’t feel very good, of course.”

Word to the wise: maybe don’t be so stingy when someone’s risking life and limb because you’re too lazy to heat up a can of soup.