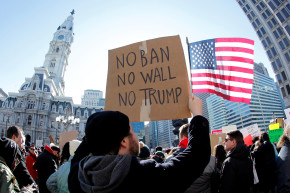 Refugees and immigrants previously banned by President Donald Trump’s executive order can continue entering the U.S. after a federal appeals court on Thursday ruled against reinstating the ban.

In a 29-page opinion, the three presiding judges unanimously ruled against the Justice Department’s argument that the suspension should be lifted for national security reasons. Thursday’s ruling is a major setback for Trump, who ran a campaign promising to secure America’s borders.

The government will likely appeal the decision, and Trump himself took to Twitter shortly after the judges’ decision to react to the news. In all caps, Trump said: SEE YOU IN COURT, THE SECURITY OF OUR NATION IS AT STAKE!

SEE YOU IN COURT, THE SECURITY OF OUR NATION IS AT STAKE!

Stephen Wermiel, a professor of practice at the American University Washington College of Law, said Thursday that while it’s possible that the government could request an en banc session of the Ninth Circuit Court — which means, in this case, it would be heard by 11 judges rather than a panel of three — it’s much more likely that “it is going to end up in the Supreme Court sooner or later.”

U.S. District Judge James L. Robart, of Washington state last Saturday ordered a temporary lift on Trump’s travel ban, signed January 27, with Minnesota later joining Washington in temporarily suspending Trump’s order. Trump’s Justice Department then filed an appeal against the states. The ruling on the ban, a divisive issue that caused numerous protests and threw airports across the country into chaos, came after a Tuesday session of oral arguments presented by the federal government and the state of Washington.

Flentje’s arguments focused primarily on national security. Noting that the seven countries included in the travel ban — Libya, Iraq, Iran, Yemen, Somalia, Syria, and Sudan — had been singled out by the previous administration, Flentje also noted that the executive order was “well within the president’s power.” Further, Flentje dismissed claims that Trump’s was a “Muslim ban,” saying, it is “not an order that discriminates on the basis of religion.”

Purcell, meanwhile, argued from a human rights perspective. He flatly denied Flentje’s assertion that suspending the ban would cause irreparable harm to the Trump administration, instead saying that, “It was the executive order itself that caused irreparable harm to our states.” Further, Purcell told the judges that perhaps “thousands” of Washington state residents had been affected by the ban. He also pointed to Trump’s previous statements about singling out Muslims to support his argument that Trump’s order was clearly favoring “one religious group over another.”

Betsy Fisher, the policy director at the International Refugee Assistance Project, noted that the Washington state case only deals with a few portions of Trump’s executive order. “The important portion for our clients that the Washington order does not stop is the change for the refugee resettlement from 110,000 for the fiscal year to 50,000 for the fiscal year,” she told Vocativ. “So even if the judicial stay prohibits implementation of the order, that portion of the order is still functioning.”

Fisher also noted that several other cases have been brought against the government with regard to this executive order, so “you’re going to see ongoing litigation” in the weeks to come.