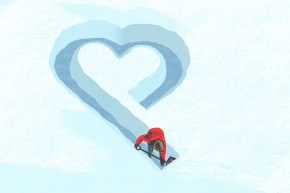 The heavier the snow fall, the more men fell victim to cardiac troubles

Snow days may be plenty great for school kids, but it could be downright deadly for their fathers, a new study published Monday in the Canadian Medical Association Journal suggests.

Canadian researchers looked at more than 120,000 hospital admissions and 65,000 deaths related to a heart attack that took place in Quebec from 1981 and 2014, specifically between the months November to April, when snow was likely to fall. They found a consistent pattern: Men were more likely to be sent to the hospital or die on the day immediately following a snowstorm, and the heavier or longer the storm was, the greater their risk. The link held firm even after accounting for other factors like age, smoking history, and heart health.

Earlier research has shown a consistent connection between bad weather and heart troubles, but it’s only recently that scientists have suspected the cold can be more dangerous for us. And when it comes to snow, the researchers said, the evidence for its heart attack effect has only leaned towards the plausible, not proven. For the current study, they wanted to look at an especially large population, while also figuring out exactly how much riskier snow could be.

Compared to a day with zero flakes, a man’s risk of a hospital admission jumped by 16 percent on the day after more than 7 inches of snow fell; for deaths, it climbed to an increased 34 percent. A similar if weaker pattern was seen for snow storms that lasted more than 24 hours.

As for why only men, the answer is unfortunately that it’s usually men who go and shovel out the driveway. And because snow shoveling is an “unique activity with both static and dynamic components,” the researchers explained, it can tax the heart past its breaking point. The cold can also play a role by constricting blood vessels, increasing blood pressure, and even causing the heart to beat abnormally.

Keeping in mind that the absolute risk of getting a heart attack on any given day is still small, the results have plenty of implications for the near-future. Blizzards are only more likely to pop up with the advent of climate change, the authors said, as rising global temperatures trigger atmospheric changes that lead to more severe weather events.

If that’s the case, the researchers said, then doctors might be smart to tell their male patients, especially if they’re out in shape, to maybe wait a little longer before getting out the shovel.