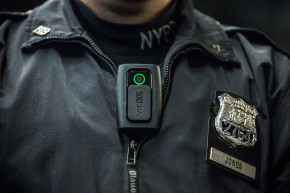 UPDATE, Feb. 10: The article has been updated to include a statement from VieVu.

As police departments around the country adopt body cameras, one leading company is running into trouble for reports of faulty technology. It’s the same company that the country’s largest, most recognizable police force has chosen to use, a decision that is now being met with significant pushback.

A $6.4 million contract between the New York Police Department and body camera company VieVu is currently being investigated by the city’s Department of Investigation, according to reports from the New York Times.

As Mayor Bill de Blasio recently announced, his current plan is to have all New York City officers on patrol outfitted with body cameras by 2019. Under this contract, 5,000 cameras would be purchased. While the details of the investigation were unclear (the NYPD did not responded to press inquiries as off press time), it’s possible that the subject of the investigation involves the department’s choice to use the small, Seattle-based body camera company with a questionable reputation.

As catalogued by DNAinfo, VieVu’s body cameras have also been the subject of scrutiny in other police departments as recently as January 2017 in Ohio, Arizona, and Florida. Among the complaints were reports that the cameras were dropping video frames.

“The system that we got wasn’t what we thought it would be,” an Ohio police chief told reporters after the cameras began failing, forcing the department to replace them. That department instead chose to use Taser International.

Taser International, which pretty much dominates the industry had reached out to various stakeholders in effort to cast doubt on VieVu’s technology following reports that the NYPD would be using them. The company also sent a protest letter to the NYPD commissioner voicing disappointment after the decision was made, calling it a “grave error that will endanger officers and members of the public.”

“To the best of our knowledge, no employees or representatives of TASER met with the Department of Investigation,” Taser VP of strategic communications Steve Tuttle told Vocativ. “However, DOI was copied on some of TASER’s procurement protests pursuant to a recent court decision.”

VieVu, in a statement to Vocativ, noted it had beat out 50 competing companies to win the contract. It said that it believed its competitor is now “attempting to spread false and misleading information about a fair and public process because it lost.”

While studies have found that complaints from citizens decline when police departments require the officers to wear body cameras and announce that they’re wearing them, their usage has also heralded concerns and questions. Some security experts worry about the privacy of all citizens (including the law-abiding ones) when living under a state of face-detecting surveillance, and Illinois officers recently filed invasion of privacy lawsuit after finding out that even their bathroom breaks were being recorded.

Despite the security concerns, police departments adopting the tech claim that this is a necessary public service. In the wake of highly-covered cases of fatal police shootings and racial profiling, the use of this tool has been increasingly common. However, there is some question as to how well footage ascertained in highly physical situations are able to capture the reality of what took place, especially when they sometimes fall off during sudden movements. And the tech is just as expensive as it is controversial: the contract put forth by TASER, which offered to outfit the NYPD with their cameras for the price of $17.2 million sheds light on just how the highly lucrative this market is.

As the contract goes through review, DeBlasio is continuing to stand by the department’s contract and choice of body cam manufacturer. “I don’t think it’s the first time in the history of the free enterprise system that we’ve seen one company try to smear another,” he said on Monday.

(Correction: The article originally stated that TASER’s contract proposal was for $12 million, an earlier proposal. The final proposal amounted to $17.2 million.)