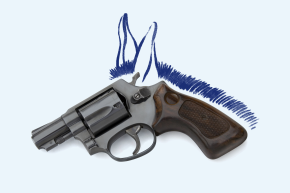 The Gun Lovers No One Talks About
By Ethan Harfenist

The Gun Lovers No One Talks About

In the wake of Donald Trump's election victory, left-leaning gun store owners are catering to an often overlooked clientele — people like them

Jae Seifert is a liberal guy. The Minnesota native says he’s in favor of legalizing weed and physician-assisted euthanasia. He’s pro-immigrant and believes in civil rights for all Americans. In last year’s election, he was an ardent Bernie Sanders supporter — before he reluctantly backed Hillary Clinton.

Much like Sanders, Seifert’s politics don’t fit the classic liberal mold. Now living in Steamboat Springs, Colorado, Seifert also happens to be passionate about firearms — primarily shooting for sport — and he’s a staunch supporter of the Second Amendment. In fact, Seifert purchased his first AR-15, that semi-automatic responsible for countless fatal shootings in the United States, in the aftermath of the Sandy Hook massacre.

“I think that in this country, because we have freedom, with that comes a certain acceptance of risk,” Seifert told us in a phone interview. “So if you’re going to be free, that also means I have freedom to do things that you may not like, which includes carrying a gun.”

The 28-year-old also owns a gun store. Seifert said it’s “just kind of getting started,” but WZ Outfitters represents a rarity in a country where gun shops are mostly associated with the conservative right. As a gun store owner with a liberal worldview, Seifert puts WZ Outfitters in a unqiue position to serve gun-lovers who shun shops owned by those who identify with the racist, xenophobic far-right. WZ Outfitters carries a range of firearms for sport and protection purposes, but you’ll find no anti-Muslim merchandise or Donald Trump-supporting bumper stickers there.

“I don’t really like that kind of traditional gun store experience where you go in, you’ve got Islamaphobic shit, really, really right wing stuff. Just the whole kind of, ‘Wink, wink. Nudge, nudge. Fuck the other guys,'” he said. “That’s also part of the reason I felt like I wanted to start my own store.”

Seifert isn’t alone. Membership increased by 10 percent since election for the Liberal Gun Club, which provides “a voice for gun-owning liberals and moderates in the national conversation on gun rights.” Vocativ found an entire subreddit dedicated to Liberal Gun Owners, a four-year old community that has close to 7,000 subscribers and includes a thread dedicated to liberal gun stores.

It appears that some of those who lean left don’t want to fork over money to shops run by trigger-happy, extreme right-wing folks who sell target sheets shaped like Hillary Clinton and stickers that read “Muslim Free Zone.” It makes sense, at a time when consumers are more aware than ever about the values backed by their favorite businesses and services.

“I don’t really like that kind of traditional gun store experience where you go in, you’ve got Islamaphobic shit, really, really right wing stuff.” —Jae Seifert, owner of WZ Outfitters

Sergey Solyanik, who owns a gun store in Lynnwood, Washington, says on one of the Reddit threads that he is a “Bernie Sanders/ACLU liberal.” Like Seifert, Solyanik’s store Precise Shooter, located 17 miles north of Seattle, is decidedly apolitical and caters to a mixed clientele (both Washington and Colorado, especially in the more rural areas, are pretty purple).

“We don’t sell any actual propaganda items. We just don’t. The store serves every customer…we want everybody to be welcome here,” he said.

Also like Seifert, Solyanik enjoys shooting for sport, which was his foray into the world of guns. He told Vocativ that his hobby eventually evolved into a full-fledged business, despite the fact that he’s an engineer by training.

Both Seifert and Solyanik are aware that when it comes to firearms, it’s not always fun and games. “Guns are inherently political. As much as I wish they weren’t, that’s just kind of how it’s shaking out,” Seifert said. “People have really strong views about them.”

That doesn’t mean left-leaning Americans aren’t armed. Sanders, a Senator from Vermont, is a hero to progressives, and he also happens to be pro-gun. While he advocated for having no federal waiting period for handguns and limited protections for gun makers, he is ardently in favor of banning assault weapons and doing away with the gun show loophole. Sander’s gun stance is largely influenced by Vermont’s rural communities, which are pro-gun and low on crime. Still, the National Rifle Association is no fan of his.

“I liked Bernie because honestly, he’s a ridiculously honest guy,” Seifert said. “He’s got a pretty solid record of, in my opinion, doing pretty solidly social liberal policies and not doing too much of the liberal platform that I don’t agree with, which is gun control, super high taxation, things like that.”

As far as his personal politics, Solyanik, who emigrated to the United States from the Soviet Union almost 20 years ago, also says that he considers himself to be “way to the left” of Hillary Clinton and the mainstream Democratic Party. “That means that I care lots about human rights. I care always about civil rights, I believe in equal opportunities, at least to start,” he said. “So I think that we should invest in infrastructure, we should invest in educating people, and we should respect due process.”

Solyanik, 46, is disillusioned by Democratic party because politicians talk about supporting the middle class, but “doesn’t actually walk the walk.” And he is particularly turned off by what he sees as Democrats’ “focusing on trying to ban guns.” In fact, Solyanik said he firmly believes that Clinton lost this year because of her position on guns.

Clinton made an enemy of the all-powerful NRA during her campaign. Once an organization dedicated to marksmanship and gun control, the NRA in the late 70s started to become intensely political. The organization spends large sums of money defending the Second Amendment, and it has essentially become an arm of the Republican Party in many ways. Unlike many liberals, Seifert and Solyanik don’t abhor the organization.

While he acknowledges that they can “go too far on a lot of their proposals,” Seifert said he supports the NRA’s existence.

“With anything that people like to support politically, it’s good to have an advocacy group or a lobbying group, especially if that lobbying group is well-organized and well-funded like the NRA is,” he said. Solyanik, meanwhile, simply lamented the organization’s takeover by conservative Republicans.

An NRA spokesperson told us that the organization has always been bi-partisan. “We endorse Democratic candidates every year,” said Lars Dalseide. “The only requirement we have when it comes to endorsing a candidate or not is their position on the Second Amendment. It has nothing to do with party affiliation whatsoever.”

And while it appears that people like Seifert and Solyanik might be outliers in their party, the fact is that liberal Americans have always owned guns and have advocated for the Second Amendment.

“I think there’s long been people on the left who have strongly believed in gun rights. In fact, it used to be that the notion of people having guns in order to protect themselves, including to be a counterweight to government oppression, has long been broadly accepted by the mainstream left, and has been very much a part of the radical left,” said Eugene Volokh, a professor of law at UCLA and gun control expert.

Volokh cited mid-20th-century movements, like those of the civil rights era when people armed themselves against the KKK, as well as the pro-gun stance of the Black Panthers, as examples of leftist movements that viewed guns positively. He also noted that there are certain regions of the U.S. “where everybody had guns,” regardless of political affiliation.

“The notion that gun rights is a conservative position is something of the last two generations,” Volokh said. “Before then, if anything, many conservatives were very much in favor of government control as a means of supposedly fighting crime. And it was often the liberals who thought it is important for people who didn’t trust the police and who didn’t think the police would be willing to protect them be able to defend themselves.”

A similar idea seems to be taking hold lately, but with a twist for a country now run by Donald Trump, who some opponents view as the inspiration for violence and bigotry stemming from America’s racist right. Right-leaning gun blogs are publishing posts to educate liberals in the wake of Trump’s victory about the importance of the Second Amendment. On November 18, the site Bearing Arms published a post entitled “Five Guns For Terrified Liberals In A Trumpian World.” Four days earlier, Monster Hunter Nation posted “A Handy Guide For Liberals Who Are Suddenly Interested In Gun Ownership.”

“Judging by your social media over the last few days many liberals have been utterly terrified that your government might turn tyrannical or that evil people will now be emboldened to hurt you. I’m going to let you in on a little thing the other half of the country is familiar with to keep those unlikely, yet catastrophic, events from happening,” Larry Correia, firearms instructor and author of the “Handy Guide,” writes. “And that my lefty friends, is the Second Amendment.”

But as Seifert, Solyanik, and a 7,000-strong Reddit group demonstrate, some from the “other half of the country” are already well aware of that little thing.