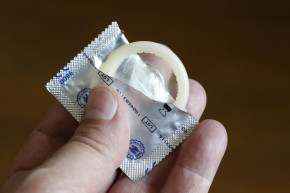 Is Better HIV Treatment Leading To Less Condom Use?
By Tracy Clark-Flory

Is Better HIV Treatment Leading To Less Condom Use?

Over the past few decades, HIV treatment has been dramatically revolutionized, allowing people to live happier, healthier, and longer lives. It’s also been shown to reduce their likelihood of transmitting the virus to others. But a new study, published in the Archives of Sexual Behavior, warns of a potential side effect of these life-changing scientific advances: people increasingly not using condoms because of a growing sense of reduced risk.

Antiretroviral therapy, or ART, treats HIV by inhibiting its growth — it doesn’t provide a cure, but it does reduce the virus’ presence in the body. It also consequently reduces a person’s viral load, meaning the amount of HIV in a person’s blood. That can reduce the likelihood of a person transmitting the virus and has led to the concept of “treatment as prevention,” or TasP: the use of ART to not only treat HIV but also to reduce transmission risk. Alongside this, there has also been the rise of pre-exposure prophylaxis (or PrEP), the pre-emptive use of antiretroviral drugs by an HIV-negative person to guard against HIV transmission.

The reason this environment is “potentially problematic,” they argue, is that condomless sex can expose men to sexually transmitted infections (STIs), and STIs can increase the risk of HIV transmission. That is because, the paper explains, STIs can lead to “local genital tract inflammatory processes that increase HIV shedding in semen rendering an individual more infectious than is apparent from his blood plasma viral load.”

The reality, he says is that many people simply don’t like using condoms, and won’t use condoms — and ART provides an effective and practical alternative in protecting against HIV. “In a perfect world everyone would just listen to what public health officials say,” he said. “But that’s just not where we live.”