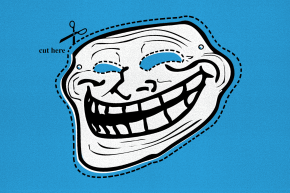 You, Too, Can Be An Online Troll
By Alejandro Alba

You, Too, Can Be An Online Troll

You might think online trolls — people who deliberately antagonize others with inflammatory posts online — can be stereotyped as being males in their mid-40’s living in their parent’s basement, but a new study suggests that, sometimes, a troll can easily be identified by looking in the mirror.

Researchers from Stanford University and Cornell University recently learned that, under the right circumstance, anyone can be an online troll and turn to being disruptive, offensive, combative, and overall unpleasant. This was concluded by using social psychology research methods on 667 subjects to investigate whether trolling is an innate characteristic or if situational factors are what influence people to misbehave online.

Turns out that 68 percent of participants were engaging in troll behavior due to situational factors. Researchers split participants into two groups and instructed one group to take a very easy test and the other to take a very difficult one. Once the test was completed, participants had to fill out a questionnaire that captured facets of their mood including tension, fatigue, and anger — obviously, those who took the difficult test were in the worst mood.

After the questionnaire, participants had to read an article and leave at least one comment. The article or its platform was not disclosed, but it was the same one for all. The only factor that changed between the two articles was the comment section; one had three troll posts pinned at the top of the comment section and the other had three neutral comments. All posts left behind by participants were then evaluated.

The 68 percent that left troll-like comments were the subjects exposed to both the hard test and the article with troll comments. The percentage then goes down to 50 when looking at participants who either took the hard test or saw the troll comments. Situational factors clearly will push people to their worst behavior, but some of us, still, have that innate tendency. About 35 percent of participants who took the easy test and read the neutral posts still engaged in trolling.

Researchers at Stanford and Cornell also analyzed millions of comments in CNN’s comment sections, which provided more indications that anyone can turn into a troll. One of the key findings was that people tend to troll late at night or early in the week since that’s when they’re the most tired or grumpy. However, the main takeaway is that everything is just one big vicious cycle of negativity. If the conversation starts badly, it’ll just spiral further.

“Just one person waking up cranky can create a spark and, because of discussion context and voting, these sparks can spiral out into cascades of bad behavior,” Jure Leskovec, associate professor of computer science at Stanford and senior author of the study, said in a statement. “Bad conversations lead to bad conversations. People who get down-voted come back more, comment more and comment even worse.”