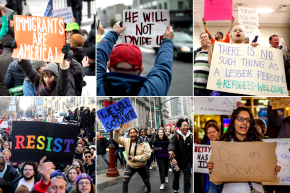 These Researchers Are Counting Crowds For All U.S. Protests
By Allee Manning

These Researchers Are Counting Crowds For All U.S. Protests

If there’s one thing we’ve learned following the Presidential Inauguration and the much-larger Women’s March movement the following day it’s that crowd size and scope matter. Now, the two researchers responsible for coming up with the most comprehensive database of crowd sizes for both the Saturday march in D.C. and all the sister marches held throughout the world have started a project aimed at ensuring every U.S. political demonstration — no matter how small — gets its due.

“Documenting the women’s march in real time, we learned how important it was for people to be seen, witnessed and counted,” Erica Chenoweth and Jeremy Pressman, a professor of International Studies and a professor of Middle East, respectively, wrote in a Washington Post article announcing the Crowd Counting Consortium, which they describe as a public service rather than a research project. Within that article, they estimated that 4,157,894 people — roughly one percent of the U.S. population — participated in the various marches planned for the day after Trump’s inauguration. This proportion was consistent even in red states like Montana and Alaska.

As noted by Vocativ in an earlier article documenting the crowdsourced efforts to count every last marcher that first began on Twitter, the average march size on January 21 was 6,000 people. About two-thirds of them were comprised of 1,000 participants or less, and many of them were far smaller, often sparse enough to go largely uncovered by local media. This, Chenoweth says, is where the power in this project can be truly observed.

“For those trying to understand resistance movements on the whole, increased activity in rural areas can help debunk the myth that certain claims are ‘urban’ claims without rural support,” she told Voctaiv in an e-mail last month. “When they are documented and receive media coverage, they add their voice to shaping the political landscape in their states and in the country. They do this by putting greater pressure on their own political leaders to listen and respond to their claims.”

The truth to this statement can be observed in the small-scale, largely spontaneous protests relating to the unfolding actions of President Trump that have continued to take shape. Since the Women’s March, Chenoweth and Pressman have recorded 185 protests, demonstrations, and vigils held to oppose controversial and potentially unconstitutional executive actions, under-qualified cabinet picks, and other national politics-related events. Based on their best guess estimates, which uses a formula accounting for high and low estimates coming from multiple sources, 119,640 people in 33 states have been involved in such events.

To be clear, the Crowd Counting Consortium is counting all protests, not just ones that directly address Trump, his policies, and administration. They are, however, the vast majority of those occurring within the country at this point in time.

While Chenoweth and Pressman were the sole people responsible for collecting the tips, news reports, and other sources in order to glean the scale of the Women’s March, they have enlisted the help of four other people to help out with the Consortium given the high volume of protests.

“[The project] gives people a factual basis for thinking about what is going on in the United States right now,” Pressman told Vocativ in an e-mail. “And if the project is still around in 10 or 20 years, I hope it will still be able to contribute that political grounding.”