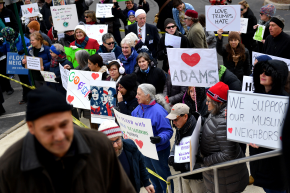 Acts of kindness, support, and solidarity toward the Muslim community are quietly blossoming around the country

The mosque in Victoria, Texas was burned to the ground just hours after President Donald Trump signed an order to ban refugees and immigrants from seven predominately Muslim countries. Family members gathered around the smoldering remains, many of them in tears, but their neighbors didn’t stand idly by.

Cash and checks from the small town’s community piled up within hours. Four churches and a synagogue offered Muslims their buildings for prayer services. Donations to the Victoria Islamic Center topped $1 million in a matter of days as an online campaign was spread far and wide.

“We were crying for the loss, but we were so happy for the support,” Dr. Shahid Hashmi, a surgeon who, in 2000, helped found the mosque, told Vocativ. “It was phenomenal.”

The outpouring of generosity following Victoria’s mosque fire, since ruled an arson, captured headlines around the world. But similar acts of kindness, support, and solidarity toward the Muslim community are quietly blossoming around the country. A wave of Americans are countering new fears of intolerance and exclusion with gestures welcoming Muslims, both large and small. They’ve come in the form of bake sales and flower bouquets, hugs and hand-written letters. Hundreds more have raised money and attended Muslim prayer services at mosques.

“My faith demands acts of hospitality, especially to people who are being scapegoated and put up as totems as fear,” said Justin Barringer, a pastor and Ph.D. student at Southern Methodist University in Dallas, roughly 300 miles north of Victoria.

On Friday night, Barringer and about 20 other members of the Young Progressive Christians of Dallas assembled outside the Islamic Association of North Texas. They offered hugs and handshakes to Muslims streaming in for an evening prayer service. Meeting for the first time, these strangers of different faiths swapped stories about work, family, and God.

“We had the most mundane conversations,” Barringer told Vocativ. “But that’s precisely the kind of conversations we need to have right now. The ones that remind us of the stuff in life we all share. That we all want the same sort of things.”

The gathering attended by Barringer was one of dozens held independently by communities around the U.S. in recent days, often in cities or areas far from the national spotlight. Waving American flags and hand-painted placards, several hundred people spilled onto the sidewalks and parking lot outside the Islamic Center of Conejo Valley in southern California’s Ventura County on Sunday. Nearly as many showed up to a Muslim worship center in Richmond, Virginia that same day and signed their names on a banner that read “We Stand Together.” The week before, hundreds of supporters covered the front steps of the mosque in Columbia, Missouri with yellow flowers and balloons — a color that symbolizes friendship.

The rallies are largely in response to Trump’s temporary immigration ban on January 27, which the White House claims will help protect the U.S. from terrorists. Many, however, view the decision as an assault on the values of a free and inclusive society long espoused American leaders. Critics also see it as an attempt by the federal government to stigmatize Islam, a religion practiced by 1.6 billion people worldwide.

Scenes of sprawling protests at airport terminals in big cities and small towns blanketed cable news, newspapers and social media, until a judge in Washington state last week blocked the executive order, allowing visa holders from those nations to temporarily enter the U.S. The legal fight continues, with a decision about the continuation of the ban expected from a federal appeals court this week.

But, as that story played out across the national media, smaller acts of solidarity with America’s Muslim community were cropping up, even deep in Trump country.

Janet Nash was one of an estimated 800 non-Muslims who attended a prayer service and reception at the mosque in Ohio’s West Chester Township, a suburb of Cincinnati, on Saturday. Trump carried Butler County, which includes West Chester’s 60,000 residents, by nearly a 2-to-1 margin over Hillary Clinton in November.

Others are finding ways to offer their support from afar. Islamic centers and mosques from Pittsburgh to Portland, Oregon say they’ve been flooded with handwritten letters, cards, and bouquets of flowers. Some have taken to social media to share these tokens of unity and tolerance

“Just wanted to let you know that you are important to us & cherished in our society,” reads one of the missives published by The Islamic Center of Portland —Masjed As-Saber. The letter, written in black cursive, is addressed to “Fellow Americans.”

Still, there remains troubling signs that anti-Muslim bias may continue to course through the American landscape. Hate crimes targeting Muslims remain on the rise in the U.S., with a reported surge in the number of attacks and incidents immediately following the presidential election. Copies of a letter that praised Trump and promised genocide against all Muslims showed up at Islamic centers across the U.S. late last year. Two weeks before the mosque fire in Victoria, someone intentionally torched an Islamic center near Seattle.

But like those in Victoria, residents near the Islamic Center of Eastside in Bellevue, Washington are coming together. Middle school students at Licton Springs in north Seattle held a bake sale that they say raised several hundred dollars for the mosque on Friday. The following evening, every seat at the Congregational Church of Mercer Island filled for a benefit concert.

“The atmosphere was really magic,” said Reverend Roberta Rominger, whose wood and brick chapel teamed with arias, Rachmaninoff, and the compassionate resolve of 200 men and women. “A whole lot of people are hungry to do something and are feeling powerless. We gave them an opportunity to come and give their support.”

The collection plates that night filled with $7,000.