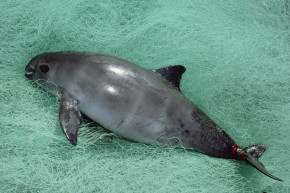 World’s Smallest Porpoise On Brink Of Extinction
By Ethan Harfenist

The world’s smallest porpoise is on the brink of extinction with approximately 30 left in the ecosystem, and there seems to be no relief in sight for these pandas of the sea.

“The already desperate situation has worsened, despite existing conservation measures and current enforcement efforts,” experts said in a report written last November for the International Committee for the Recovery of the Vaquita (CIRVA). “Unless this decline can be stopped by eliminating mortality in illegal gillnets, the vaquita will be extinct in a few years.”

The vaquita population took a nosedive between 2015 and 2016 when the animals disappeared at a staggering 49 percent rate. The population declined by 90 percent between 2011 and 2016, at an average rate of 39 percent a year. The World Wide Fund for Nature highlighted the report in a blog post on their site on Monday and provided a link to CIRVA’s findings which the Fund said was released last week.

“The only way to save the vaquita from extinction is for the Mexican government to immediately and indefinitely ban all fisheries within its habitat and ensure full and effective enforcement,” the WWF said in its post. The Fund also called on the Mexican government to crack down on totoaba fishing, which inadvertently drowns vaquitas that are caught in the gillnets used to catch the coveted fish. The totoaba itself is an endangered species with bladders that are considered a delicacy in parts of Asia.

The vaquita is native to Mexico’s Upper Gulf of California, but the WWF is calling for international help from both the U.S. and from China.

Scientists are planning to catch vaquita specimens and place them in an enclosed area in the Gulf of California so that they can reproduce without outside threats. “Illegal fishing continues and if we don’t capture them, they will die anyway,” CIRVA chairman Lorenzo Rojas-Bracho told Agence France-Presse. He added that such a program could begin as soon as October, and that the captured vaquitas could remain in the habitat for up to a year.

CIRVA told AFP that “capturing and housing vaquitas will be difficult, and perhaps impossible, and the species may not prove to be suitable for such conservation actions.”