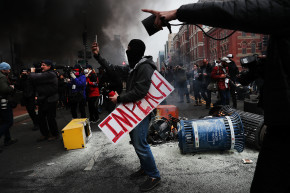 Right-wing trolls attempt to identify and infiltrate their ranks — so far, with limited success.

A protest following the inauguration of President Donald Trump — Getty Images
By Janus Kopfstein
Feb 09, 2017 at 9:08 AM ET

The anti-fascist movement, also known as antifa, has a long history of physically confronting white supremacist and neo-nazi groups, aiming to deny them a platform to speak and establish their hateful agendas within the realm of “legitimate” political debate.

Recently, the movement has seen a resurgence in response to the massive uptick in racist violence and rhetoric that has followed Donald Trump’s campaign and election. In Berkeley, CA, anti-fascist protesters shut down a planned speech by right-wing hatemonger Milo Yiannopoulos, setting fires and smashing the windows of nearby corporate storefronts. And in Washington, D.C., groups of black-clad anti-fascists distracted from Trump’s inauguration by spraying graffiti, torching a limousine, and facilitating the now-famous video of neo-nazi leader Richard Spencer being punched in the face.

Now, with the increased media visibility, activists aligned with anti-fascist and anti-racist movements face the need to ramp up defenses both online and in the streets, as right-wing trolls attempt to identify, harass, and infiltrate their ranks — so far, with limited success.

Over the weekend, Chuck C. Johnson, an infamous internet troll known for leading misogynist online harassment campaigns, published a list on his website GotNews that he claimed contained the personal information of everyone arrested during the Inauguration Day protests in Washington, D.C. The unconfirmed list gave the alleged names, age, and city of residence of the 231 people indiscriminately mass-arrested by the Metropolitan DC Police after some protesters set fires and smashed the windows of a McDonald’s and other storefronts.

Included on the list is Vocativ reporter Evan Engel, who was covering the protests along with several other journalists who were previously reported to have been arrested. Despite that only a small group of protesters engaged in destructive acts, nearly all of those arrested at the demonstrations are facing felony rioting charges. (Engel’s charges were later dropped).

The vast majority of the names could not be independently confirmed; an MPD representative told Vocativ that it would not confirm the authenticity of any documents that are not officially released by the MPD. Johnson is also a vociferous troll and conspiracy theorist known for outing an alleged rape victim and releasing false information to encourage the harassment of women and is not considered credible.

In another case last week, a website called antifascism.org briefly collected personal information from visitors before it was revealed as a hoax set up by a teenage troll. After it began featuring videos of Adolf Hitler speeches, several “alt right”-aligned Twitter accounts attempted to spread a false story claiming the site is an anti-fascist organizing hub that had been “hacked.” In reality, the site was only a few days old, and the domain name had recently been purchased by one Alexander Beck, a teenage Trump supporter from Denver, Colorado. The site featured a form to collect email addresses from visitors, as well as “satirical” false information about the anti-fascist movement.

Anti-fascist groups quickly picked up on Beck’s not-so-elaborate ruse, posting several messages on social media warning that the site is a “honeypot” and that people should stay away. Beck later admitted the site is a hoax, but he claimed that “no data was collected” from visitors when contacted by Vocativ.

“I guess you’re a little dense too, haha. That seems to be the case with your type,” Beck told Vocativ in a Twitter message. When asked why he set up the site, and why he would include an email signup if he wasn’t collecting any data, he refused to answer. “I’m done talking to you,” he said. “You’re fake news.”

While these kinds of attacks are nothing new for them, anti-fascist and anarchist groups say they have anticipated a backlash to their movement’s recent high-profile actions — and they’re not taking any chances.

On Sunday, the anarchist news portal It’s Going Down posted a guide to prevent doxxing, the act of gathering and posting personal information online such as names and addresses for the purpose of targeted harassment. The guide includes instructions on how activists can scrub their information on social media and “people search” sites like Spokeo and Family Tree, which aggregate personal data from public sources.

Many of these defenses have been employed by other groups who have faced online harassment in the past, including women and game designers targeted by the misogynist “GamerGate” movement in 2014. In some cases, victims whose information leaked have received physical death threats and were subjected to “swatting,” a dangerous practice where harassers call in false threats to the victim’s address to summon a heavily-armed SWAT team.

“The bad news is that many of the people they are getting information on are new to our movements and are more likely to have lax security,” It’s Going Down’s authors wrote. “Also, the ability of the Alt-Right to harvest information through online mediums like Facebook shows that we all need to tighten up the ship as we move forward in the current era under Trump, as well as incorporate these ethics into our daily routines.”

The doxxing won’t be limited to online spaces, if the past is any indication. During a recent meeting at an anarchist community organizing space in New York City, attendees were warned that police and far-right infiltrators will likely be reinvigorating efforts to get personal information from anti-fascist activists at events and protests, as they’ve done in the past, an attendee told Vocativ. Organizers are advising activists to form affinity groups and be wary of unknown parties soliciting personal details, information about organizing, or political views.

The backlash comes after anti-fascist demonstrations on college campuses shut down planned speeches from two prominent neo-fascist leaders: Former Breitbart editor and white supremacist Milo Yiannopoulos, and Gavin McInnis, a co-founder of Vice Media who left the company in 2006 and leader of the “Proud Boys,” an anti-feminist clique within the racist “alt right” identity movement. Activists defended the actions in Berkeley, which resulted in fires and property damage to nearby corporate storefronts, noting that Yiannopolous recently harassed a transgender student during an event at the University of Wisconsin-Milwaukee. At another event at the University of Washington, in Seattle, an anti-fascist activist was shot by a Milo fan while protesting against his appearance on the campus.