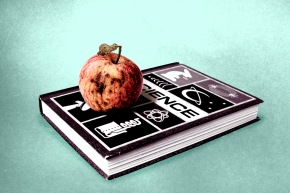 The waging debate between whether or not there’s any place for teaching intelligent design in schools has been playing out in the courts since 1925, and the debate on how to teach climate change is not new either. But new efforts to ‘teach the controversy’ to students come at an especially fraught time: just as the highly contended Betsy DeVos’ was confirmed as Education Secretary this week.

While DeVos has remained fairly tight-lipped on the highly politicized issues of how climate change and evolution is taught in schools, her financial support for conservative senators with climate change-denying viewpoints, support for anti-science evangelical groups, and comments on religion’s role in schools have been concerning to many.

There have been five new bills deemed “anti-science” by the National Center for Science Education proposed this year so far. According to Glenn Branch, deputy director of the National Center for Science Education, this is pretty much par for the course, as most legislation is presented in the first and second quarter of the year, and there are usually between 6 and 12. While several of these bill may sound pretty reasonable on their face, the coded language in almost all of them has not escaped their critics.

In South Dakota, Senate Bill 55, is less than a week away from a hearing that will decide whether or not teachers will be able to point out the “strengths and weaknesses” of objective scientific information presented in their classrooms. Another new bill introduced in Texas, where the State Board of Education just recently voted in favor of science standards that explore “all sides of scientific evidence” by explicitly questioning “the complexity of the cell,” and “stasis in the fossil record,” also calls for looking at the strengths and weaknesses of existing scientific theories. Yet another proposed bill that uses the same “gotta-hear-both-sides”-implying phrase was just introduced in Oklahoma. Similarly, a new Senate Resolution posed in Indiana urges support for teachers who choose to teach a “diverse curriculum.”

Simply stated, passage of these bills would mean that lessons centering around scientific theories that are all but entirely accepted as fact among the scientific communities (read: evolution and climate change) could be undermined by a teacher’s own beliefs of creationism or climate change denial.

“[These terms] belittle evolution as scientifically controversial,” said Branch. Other phrases he has seen in his time looking at science-denying education legislation include “teach the controversy,” “critical analysis,” and “academic freedom.”

“Saying that you’re for [these terms] is like coming out in favor of apple pie,” he said. “They’re kind of feel-good terms but when you look at the details of what’s going on, you find that the motivations and intentions of these sponsors is to give license to teachers to misrepresent evolution and/or climate change as scientifically controversial, or in some cases, to present various forms of creationism.”

The reason for such creative and misrepresentative language is the fact that outright teaching creation as opposed to evolution has been explicitly illegal since 1968.

Tellingly, IntelligentDesign.org has also advocated for “increasing the coverage of evolution in textbooks by teaching students about both scientific strengths and weaknesses of evolution.” In their supplementary materials, the site’s parent organization the Discovery Institute advocates for this as a means of teacher academic freedom.

In light of this context, DeVos’ confirmation hearing last month in which she said she supports science lessons that “allow students to exercise critical thinking” sounded alarm bells for those familiar with this kind of rhetoric.

As the Education Secretary, she will assuredly continue to advocate for charter schools and vouchers that let students use taxpayer dollars for tuition at private, religious, and for-profit schools, given her lack of personal familiarity with or support for the public school system. As these schools are exempt from many federal and state curriculum standards, that kind of favoritism sends a clear message. While DeVos will not have direct influence over public school curriculums, a matter handled by the states and municipalities, her principles could help inform decision-making about federal and state standards, policies, and programs.

“She does have a bully pulpit,” Branch said. “Educators listen to the Secretary of Education, even if they don’t have to do what she says, and it would be very disappointing if she used her position to try to empower science denial in the public school classroom.”

Especially when an estimated 30 percent of teachers already believe climate change is the result of natural causes, and (according to 2008 data) one in every 8 biology teachers say they teach creationism.