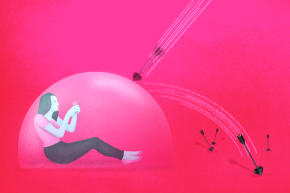 Your Date’s Biggest Turn Off Could Be Your iPhone

This Valentine's Day, maybe leave your device in your pocket

Looking for love this Valentine’s Day? Then you’ll want to leave your phone in your pocket. Match.com released the findings from its seventh annual Singles in America study this week, showcasing trends in dating rituals and preferences.

Match surveyed 5,509 single men and women, ages 18 to 70+ years, across the U.S. to capture the attitudes from singles across generations when it comes to love, sex, and relationships. The study revealed that some of the biggest turns off involved a cellular device.

Out of those surveyed, 75 percent said they don’t like it when their date answers the phone without prior explanation. People also reported getting upset when their date sends or reads a text message. It actually seems that the idea of a phone being present at all is frowned upon by many. The survey shows that 58 percent of single people don’t want to see a phone on the table — especially if it’s face up — and 41 percent think its rude if their date takes it to the bathroom.

Social media also has a big impact on the success of a date, 42 percent of singles judge their date on their social presence, and those with unpopular online opinions have odds against them. The survey shows that singles will be turned off by those who often complain on Facebook (58%), voted for Trump (44%), over post (50%), or have bad grammar (39%).

The Singles in America study also found most men agreeing that feminism has change dating for the better and that they prefer meeting women who are entrepreneurs. Single men (71%) said they also find it attractive when a woman offers to split the bill.

However, both parties look at splitting the bill differently. Men think that when a woman offers to split the bill they’re either being polite or that they don’t want to be mistaken for wanting a free meal. Women on the other hand, offer to pay because they don’t want to feel obligated for a hug, kiss, or follow-up dates.

So if you have the latest, coolest phone such as the iPhone 7 or Samsung Galaxy S7, then you might score a date and potentially even a second and third. Eventually, maybe you’ll even fall in love.