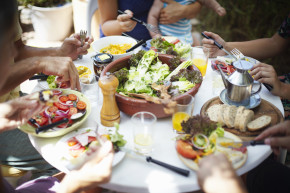 Crane your head into the diet, health, and fitness aisle of your local Barnes & Noble, and it won’t take long before you come across dieting books that promise to help repair both body and mind. Dig a little deeper and you’ll find some that claim all our mental woes can be fixed with a new diet.

But nutrition science is a tricky thing to get right. Even once-common tenets of dieting advice — i.e., avoid nearly all fats, eating foods high in cholesterol is bad — have been scratched in recent years. And when it comes to our eating habits and our mental health, there’s been no smoking gun of a direct cause-and-effect relationship between the two, just research that suggests the two are connected somehow. A recent study published last January in BMC Medicine, however, appears to be the strongest bit of evidence yet that our minds really are what we eat.

Sixty-seven volunteers dealing with moderate to severe depression were recruited by Australian scientists to take part in a randomized controlled trial. Half were given regular hour-long sessions with a dietician for 12 weeks, intended to help them stick to a modified version of the popular Mediterranean diet, while the other half received social support sessions that let them talk about whatever was on their mind instead. By trial’s end, the dieting group reported a significantly better improvement in their level of depression, and 32 percent even experienced a remission of their symptoms entirely, compared to 8 percent of people in the control group.

While the findings are based on a small group of people and preliminary, the authors wrote, they’re also the first to directly test whether an improved diet can improve our mental health. And if they hold up under scrutiny, it could signal the potential of using dietary counseling to help patients recover from depression, alongside standard treatments like medication and therapy.

Staples of the Mediterranean diet includes fruits and vegetables, whole grains, and olive oil, while the modified diet includes the addition of nuts and legumes. All the volunteers recruited had reported poor diets prior to the study’s start, but volunteers in the dieting group reported eating more of these healthier foods during the trial. Afterwards, the control group was offered a chance to join group nutritional counseling sessions.

While this sort of research can’t tell us why certain foods could relieve depression, it’s thought our diets influence inflammation and how we process stress, and even the kind of harmless bacteria found in our guts, all suspected factors in depression. Some research has also found that people with mental health problems tend to be more malnourished than the general public to begin with, which a good diet could obviously address. And the flurry of positivity that often surrounds changing our lives for the better could also account for a boost in mood, the researchers said.

Importantly, most of the volunteers were already being treated for depression while in the study. Meaning that, contrary to some more dubious claims tossed out by health gurus, a new diet alone shouldn’t be seen as the miracle solution to depression and other mental health disorders. Coupled with the emerging research showing that exercise can also keep us mentally fit, though, it’s fair to say that we can do a lot outside of the doctor’s office to stay on top of our brain game.