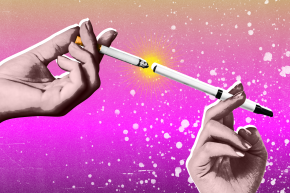 Study: E-Cigs Really Are Safer Than Tobacco (Proof Is In The Pee)
By Ed Cara

Study: E-Cigs Really Are Safer Than Tobacco (Proof Is In The Pee)

Six-month results show users have less toxins in their bodies

Though the first types of electronic cigarettes were developed around 2003, it’s only in the last few years that they’ve truly skyrocketed in popularity. At the same time, there’s been a growing debate over how dangerous these products are to our health, particularly when compared to traditional cigarettes.

E-cig fans and manufacturers have claimed the tobacco-free delivery of nicotine comes with much less chemical baggage, while also making it easier for people to gradually quit smoking. But critics, including the World Health Organization, have shot back that there’s still too little we know about the long-term effects of breathing in vaped smoke. They’ve also pointed to research showing that e-cigarette use doesn’t help people quit smoking; one study even found that young teens who first pick up vaping only become more likely to switch over to the real deal than if they had never vaped at all. And last December, the Surgeon General Dr. Vivek H. Murthy went as far to call e-cigarettes a “major public health concern,” especially for young users.

More Guess What? Vaping Is Getting Kids To Start Smoking — Not Stop

A new study published Monday in the Annals of Internal Medicine may not settle the debate completely, but it does seemingly score a win for vaping fans. Volunteers who had either switched to e-cigarettes or another form of nicotine-replacement therapy (NRT) for at least six months, researchers found, had much lower levels of toxins and carcinogens in their system than regular smokers. Adding to that, their toxin levels were much lower than what would have been predicted by earlier lab studies.

“Our study adds to existing evidence showing that e-cigarettes and NRT are far safer than smoking, and suggests that there is a very low risk associated with their long-term use,” said lead author Lion Shahab, an epidemiologist at the University College London, in a statement released by Cancer Research UK, the non-profit charity that sponsored the study.

The results aren’t the first to show relatively low levels of carcinogens from e-cigarette use, but they are the first to do so via tests of people’s saliva and urine, the researchers said. Other studies have instead relied on measuring the amount of chemicals released per vaping puff, or focused on certain chemicals found on the label. One in particular, diacetyl, is a key part of flavored vaping fluids, and has been linked to an incurable lung disease in factory workers. But there’s no direct proof yet that diacetyl exposure from vaping is dangerous in the same way.

E-cigarette users in the current study weren’t completely in the clear, though. Those who didn’t stop smoking tobacco after they took up vaping or NRT still had toxin levels comparable to regular smokers. In other words, it’ll likely take a clean break from smoking for vaping to be noticeably healthier for you. And the jury’s still out on whether switching to e-cigarettes actively encourages people to quit smoking.